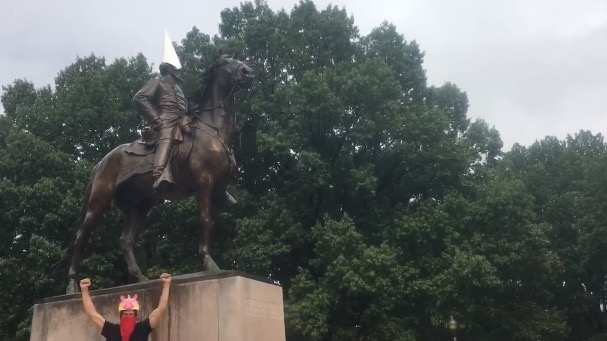 A small group of people gathered by the Nathan Bedford Forrest statue in Health Sciences Park around midnight on Monday.

Many of the demonstrators live-streamed the events of the night on social media. One of those videos revealed intentions to pull the statue down if the group could muster enough manpower. The demonstrator in the video instructed people watching to join the group and to bring rope.

But within eight minutes of the video going live on Facebook, several police cars surrounded the group, whose members decided to stay put at the base of the equestrian monument.

As more police cars pulled up, the group of demonstrators also grew. After minutes of standing at a distance, police officers approached the group and advised them that they were on property that's closed to the public after 8:00 p.m.

As a result, members of the group were asked to hand over identification one by one then told they needed to exit the park, which after a while they eventually did.

Hours earlier on Monday, a video of someone placing a white hood on the statue was shared to Facebook. The hood was later removed by park security.

These events came on the same day that the City of Memphis' attorney Bruce McMullen announced the City is prepared to sue the State in order to remove the Forrest monument, as well as the Jefferson Davis statue in Memphis Park on Front.

The City currently has a pending waiver to the Tennessee Historical Commission for the removal of the Forrest statue and plans to file a waiver in the next month for the Davis statue.

If the waivers are rejected, McMullen says the City will appeal up to the state Supreme Court.