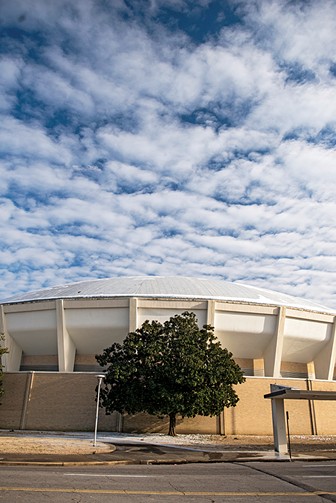 The MidSouth Coliseum could make money if it was reopened as a multipurpose indoor facility focused on youth and amateur sports.

That’s the bottom line of a new business plan for the building from the Coliseum Coalition, a group that has been working for more than two years to revive the long-shuttered building.

“This has been considered the missing piece of the Coliseum, or how to solve the Coliseum ‘problem,’” said Roy Barnes, president of the Coliseum Coalition. “The economic viability of the building has always been a huge issue.”

The new plan will be publicly released Thursday by the Coalition. Barnes said his group has already shown it to city officials. Next, he said he’ll continue to meet with leaders, possible stakeholders, and public groups to “show it off and get people excited.”

Barnes said he knows that the building’s viability has been met with skepticism. Last year, the Coalition concluded it would cost about $23 million to bring the building back to life, a figure about $7 million lower than proviso estimates.

But Barnes said the group used conservative estimates on events and rentals based in reality and community need. He said focusing on sporting events made the money work but the group certainly wants the Coliseum to be used for an array of other events, calling it a “place of imagination.”

The numbers
According to the Coalition’s business plan, nearly 426,000 would visit the Coliseum in its first year open. That number goes up to more than 672,000 in its fifth year open.

It would cost about $1.1 million to run the place in the first year. That figure includes an executive director who makes $100,000 as the highest-paid person on a four-person staff.

The group said the Coliseum could yield revenues of more than $1.4 million in its first year, spinning off a profit of $352,000.

In five years the building could generate revenues of $2.3 million. With expenses of $1.5 million that year, it would make just more than $762,000, according to the Coalition business plan.

It would achieve these figures with a mix of events and rentals. Hosting youth or amateur sporting events would be the biggest financial driver, making up about 56 percent of the mix of events that would be held there.

But the Coliseum would host tons of other events, too, like graduations, concerts, and could be rented as a hospitality center for events at Tiger Lane and the AutoZone Liberty Bowl.

“That’s the money,” Barnes said. “Then the beauty, even though we don’t make a big deal out of it, is that it’s set in history. People, no matter is you’re playing basketball or hip hop or soul, want to go to the Coliseum and be a part if it.”