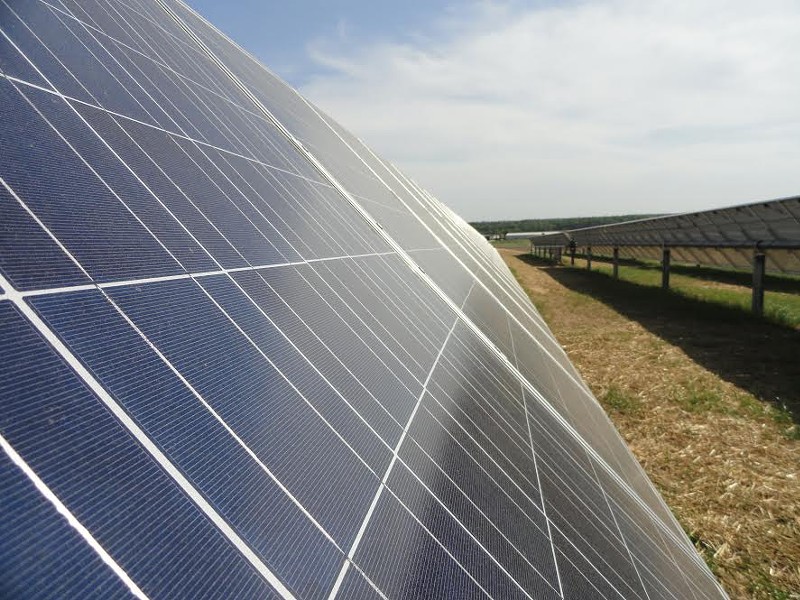 You’d love to off-grid your house but going solar seems, like, really hard and expensive.

Memphis Light, Gas, & Water (MLGW) is working now to, perhaps, make solar more approachable in the future. The utility launched a survey this week, asking its customers if they’d be interested in community solar, or sharing a solar array with a group of other customers.

In community solar projects, a bunch of energy users all chip in to buy a solar array. Imagine something like the field of dark panels aimed skyward at the Solar Farm on I-40 but much smaller. The arrays are not on people’s individual homes or businesses. Instead, they’re installed together on a different site but the community members all draw their power from them.

Community solar is pretty new. The first project in the country was installed in 2006. But it’s growing rapidly.

In 2014, 66 megawatts of power were generated through community solar projects, enough to power about 43,000 homes, according to the Solar Energy Industry Association. Projects underway now in 29 states could boost that figure to 3 gigawatts of electricity by 2021, according to GTM Research, which said, community solar “is on the cusp of becoming a mainstream driver of U.S. solar market growth.”

Solar is still pretty small in Shelby County. Becky Williamson, strategic marketing coordinator for MLGW, said just more than 90 customers have installed small-to-mid-sized solar systems on their homes or businesses since its Green Power Providers program started in 2007. Many customers are still interested, she said. But here, the money has to be right and community solar could help.

“Small to midsize systems really don’t take advantage of economies of scale than a larger system would,” Williamson said. “So, they’re still more expensive to install than something that would be big.

“That’s one of the advantages of community solar. Instead of a bunch of individual people putting a bunch of small systems at a higher price per watt, you could get larger system at a lower price per watt and everyone could share in that collective, community aspect of it.”

MLGW’s survey is interested in how many people are interested in community solar, of course. But the utility also wants to know how customer would want to pay for it. Would you want to pay up front? Or, monthly? If so, how much would you be willing to pay for solar energy?

Community solar projects pay for themselves in about 12-15 years, Williamson said, and the arrays have a shelf life of up to 25 years. So, it wouldn’t be a short-term, on-again-off-again commitment.

But you have some time to make up your mind. The utility is still very much in the exploratory phase of community power and a program would not be available for at least another couple of years, Williamson said.

MLGW is working closely on the project with the Smart Electric Power Alliance (SEPA), which helps the electric power sector transition to a clean-energy future. In its latest market snapshot, SEPA noted that “community solar continues to boom,” and outside of traditional markets like California, Hawaii, and Arizona.

“We now have thriving solar markets in the Southeast, and we’re seeing growth in states such as Utah and Arkansas — another sign that solar really is a competitive, mainstream power,” said SEPA research analyst Brenda Chew.