Tennessee Valley Authority (TVA) officials have spent about $40 million over the last three years on corporate jets, airplanes, and a “Mercedes-Benz-style helicopter,” according to a clean energy group, but TVA says it needs them for safety and for its “economic development activities.”

The Southern Alliance for Clean Energy (SACE), a coalition of various groups that include a conservative Tea Party organization and the National Association for the Advancement of Colored People (NAACP), reported the purchases on its blog Tuesday. The group found the aircraft through searches of Federal Aviation Adminstration (FAA) records.

TVA produces power at coal-fired power plants (like the Allen Fossil Plant in Memphis), at dams across the valley, nuclear power plants, and more. It sells that power to local utilities, like Memphis Light, Gas, & Water (MLGW), which then sell it to residential and business customers.

So, the money for TVA’s business expenses, like jets and helicopters, comes largely from anyone who pays for electricity. Memphis is the TVA’s biggest customer.

“I have no doubt that the founders of TVA are rolling in their graves to see this hijacking of TVA’s mission,” read the SACE blog post authored by Stephen Smith, the group’s executive director. “These expensive executive toys do not meet the TVA motto ‘For the People of the United States of America’ and it looks more like ‘for fat cat bureaucrats living high on the hog at the expense of electric ratepayers.'” 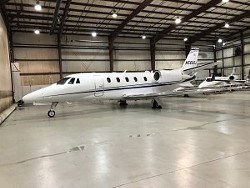 “TVA serves an 80,000-square-mile service area and our employees routinely travel throughout this area to meet with a large number of customers and other stakeholders in parts of seven states as well as prospective companies looking to invest in the Tennessee Valley,” Hopson said in a statement. “The majority of these locations do not have commercial air service, leaving private aircraft as the only option for safe, timely travel.”

The majority of these locations do not have commercial air service, leaving private aircraft as the only option for safe, timely travel. tweet this
Hopson said having identical jets “increases safety and reduces operational and maintenance costs.” A turboprop plane was replaced, he said, because jets have better safety records and TVA pilots can fly and train on only one type of aircraft.

SACE also found that TVA recently bought a “luxury helicopter” with hardwood floors, part of an interior designed in the new Mercedes-Benz Advanced Design Studio in Como, Italy, according to SACE. The interior is made to look those in Mercedes’ luxury cars.

Hopson said the TVA bought the helicopter for more than $6.9 million.

“The helicopter was purchased primarily to support our economic development activities and has the highest passenger capacity of all of our helicopters plus a number of redundant systems to enhance its operational safety,” Hopson said.

The SACE blog questioned this, too.

“Do TVA executives need to be riding around in a Mercedes-Benz-style helicopter with hardwood floors when they negotiate a sweetheart deal with big industrial customers at the expense of ratepayers?” SACE’s Smith asked in the post. “Maybe I am missing something, but my read of the TVA Act clearly states that the purpose of TVA is to protect the residential customers, not to buy flashy toys for millionaire executives and make backroom deals with private industry.”


Do TVA executives need to be riding around in a Mercedes Benz style helicopter with hardwood floors when they negotiate a sweetheart deal with big industrial customers at the expense of ratepayers? tweet this
Bringing the expenses to light comes as TVA is introducing a new, fixed, 12-percent “grid access fee” to utility companies like MLGW.

“Now TVA is proposing for the first time ever a wholesale fixed charge called a ‘grid access fee’ that will not be based on energy usage but on TVA’s administrative fixed cost,” Smith wrote. “In light of increasing executive bonuses and compensation – and now the luxury jets and helicopters – maybe the new proposed fee should be more accurately called a ‘Greed Access Fee.’