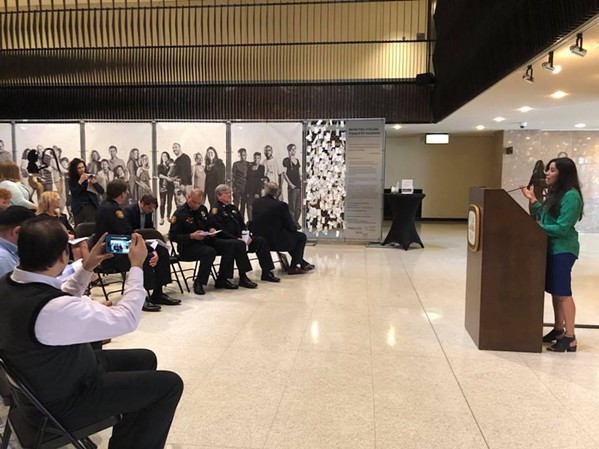 In 2015, immigrants contributed $4.2 billion to Memphis’ gross domestic product, according to a report by Latino Memphis and New American Economy.


The report, “New Americans in Memphis: A Snapshot of the Demographic and Economic Contributions of Immigrants in the Metro Area,” is the first solely dedicated to immigrant contributions in the city.


The findings of the report were announced Tuesday at city hall during a reception for Barrier Free, an art installation set up in the Hall of Mayors that’s meant to honor diversity.


“Memphis is a city made better by the diversity of its people and the information in this report shows that,” Memphis Mayor Jim Strickland said.


The report also found that in 2015 immigrant households in Memphis earned a total of $1.6 billion and contributed $109.7 million to state and local taxes.

"Today, facts matter more than ever, and this report sheds light on the contributions that new aspiring Americans bring into our local economy,” Mauricio Calvo, executive director of Latino Memphis said. “The report also shows some of our opportunities for growth, particularly around education.

“Memphis needs to consider immigrants, refugees and the U.S. born generations that follow them as part of our smart growth strategy.”


Immigrants make up just over 5 percent of the city’s population, yet represent 9 percent of business owners in the metro area, the brief cites. It also reports that immigrants are about 27 percent more likely to be entrepreneurs than those born in the U.S.


Here are some other findings of the report:


-Immigrants account for more than 14 percent of the metro area’s Science, Technology,

Engineering, and Math workers and represented nearly a quarter of Memphis’ construction workers in 2015.


-Immigrants contributed to preserving 3,210 local manufacturing jobs in 2015​, by helping companies keep jobs local that would have otherwise vanished or moved elsewhere.


-About 51 percent of immigrant households are homeowners, with a sum property value of $2.4 billion.


-Earning a total of $414.8 million in 2015, the undocumented population in Memphis held nearly $353.2 million in spending power that year.


“I am hopeful that the information in this report will help honor his legacy by helping eradicate the injustices that immigrants are facing,” John said. “This brief comes at a time where

tensions paint immigrants in a certain negative light, but it is clear from this report that as a whole, all immigrants, regardless of status, are actively contributing to this economy.”