Campaign to Pick up Where King Left off on Fighting Poverty 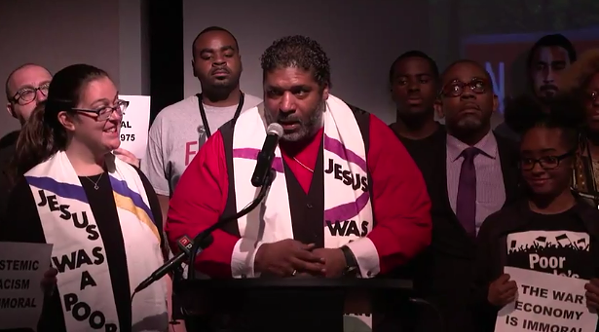 
Revs. Dr. William Barber II and Dr. Liz Theoharis, co-chairs of the Poor People’s Campaign: A National Call for Moral Review detailed a plan to revive the campaign King was leading at the time of his death.

The first piece of the campaign will be a national press briefing on April 10th, at which a study on poverty will be released, as well as the moral demands of the movement.


Then, beginning May 14th, 40 days of direct nonviolent action is slated to take place in Washington D.C. and at least 30 other states around the country. Theoharis said the movement will be a “season of organizing and coming together across all lines that divide us” in order to “break through the noise of the current political system.” The 40 days of action will continue through June, ahead of a “mass mobilization” at the U.S. Capitol.


The actions will challenge the “interlocking injustices” of systematic racism, poverty, the war economy, environmental devastation, and the nation’s “distorted morality.”

“The reality is since the first Poor People’s Campaign, the issues of poverty and war and systemic racism have taken a side seat and we are rising up from the bottom to challenge that to save the soul of this nation,” Barber said. tweet this

The overall aim of the new Poor People’s Campaign is to “unite the poor, disenfranchised, and marginalized across the country in an effort to transform the political, economic, and moral structures of society and to save America’s soul.”


“The reality is since the first Poor People’s Campaign, the issues of poverty and war and systemic racism have taken a side seat and we are rising up from the bottom to challenge that to save the soul of this nation,” Barber said.


Barber said that the conditions that motivated the 1968 Poor People's Campaign have only worsened, as today 41 million Americans are living in poverty. The campaign will challenge the notion that the poor are poor because of personal failure, rather than flaws in the system, Barber said.


“People are coming together to shift the moral narrative so that we can shift the moral agenda,” Barber said. “ We are not trying to be on the left or the right; we are standing in the moral center.”