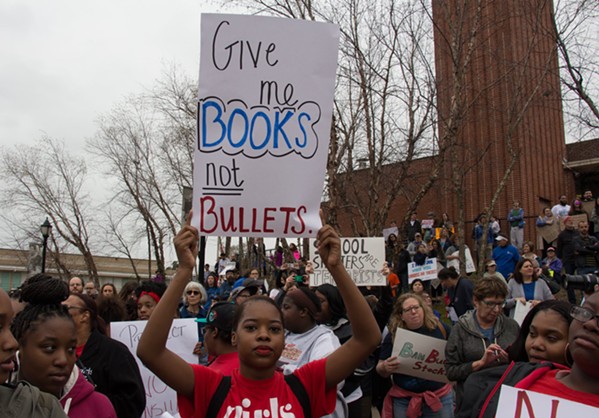 Students at about 20 high schools here plan to walk out of class at various times on Thursday to protest gun violence and other ills in schools.


Responding to the recent school shooting in Parkland, Florida that resulted in 17 deaths, the walkout is ahead of the 2,100 walkouts planned across the country as a part of national school walkout day on Friday — the 19th anniversary of the shooting at Columbine High School, where 13 people were killed.


Organized by students, the national walkout has three goals: hold elected officials accountable, generate solutions to gun violence, and to engage students in the political process.


In Memphis, students will have 17 minutes of silence, honoring each Parkland victim. They also will use the time as an opportunity to brainstorm solutions to gun violence. Via social media, using the hashtag #YouthSolutions901, students can make suggestions for ways to increase school safety.

Via social media, using the hashtag #YouthSolutions901, students can make suggestions for ways to increase school safety. tweet this

The strongest recommendations from students will be presented at the school board meeting on Tuesday, April 24th, according to the walkout’s organizers.


At some schools, students will also take part in “know your rights” discussions, touching on issues like sexual harassment and police brutality. Students will also be given the chance to register to vote.


Students are also asking the Shelby County School administration to improve mental and emotional health services in school, hire more guidance counselors and social workers, to expand their restorative justice practices, and to provide protection for students and their families from Immigration and Customs Enforcement (ICE).


Dorsey Hopson, SCS superintendent said ahead of Thursday's events that no students or teachers will be punished for participating in the walkout.

April 19, 2018, is about #Youthsolutions901 and supporting the students' right to free speech/expression in a safe, peaceful and productive way. SCS students participate in the #NationalSchoolWalkout. https://t.co/sh2MMBBvn8