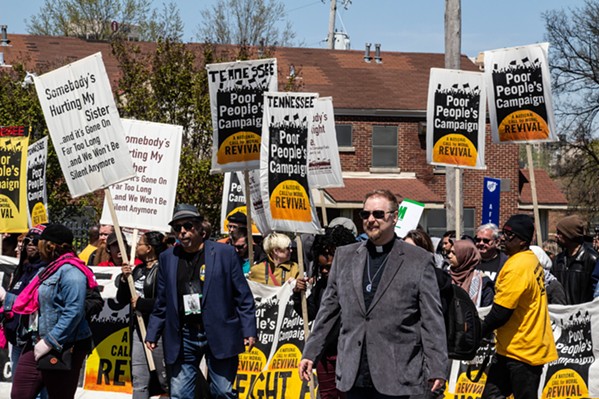 About 30 Memphians headed to the Tennessee State Capitol building in Nashville Monday for a rally kicking off 40 days of nonviolent, direct action organized by the national Poor People’s Campaign.


Meant to “reignite” the campaign started by Dr. Martin Luther King, Jr. 50 years ago, the new campaign will confront poverty, racism, and militarism, by demanding an overhaul of the nation’s voting rights laws, programs to help the 140 million Americans living in poverty, attention to ecological devastation, and measures to curb militarism and the war economy.

“We must have moral dissent and people who will challenge the status quo,” Barber II said. tweet this

“We must have moral dissent and people who will challenge the status quo,” Rev. Dr. William Barber II, co-chair of the Poor People’s Campaign: A National Call for Moral Revival, said. “We need a fusion movement — black, white and brown; gay, straight, and transgender; civil rights and labor; doctors and patients; people of faith and people of conscience.”


The rally in Nashville is one of over 30 that are slated to take place at state capitols around the country and the U.S. Capitol Monday. More than two dozen local activists, under the leadership of Antonio Cathey with with Fight for $15 and Edie Love with the Tennessee Poor People’s Campaign, traveled to Nashville to take part in the rally. 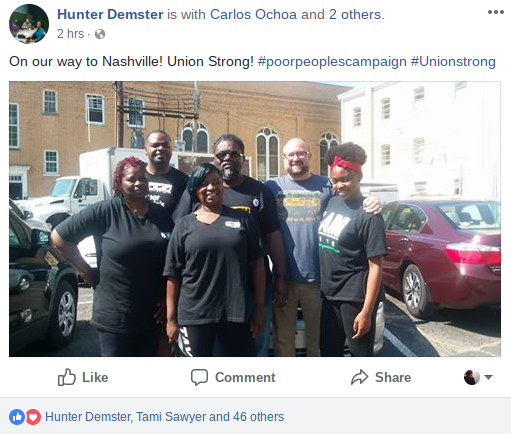 During the first of the six-week campaign, participants will address the number of people with disabilities who live in poverty. The following five weeks will be used to address systemic racism and poverty, the war economy, ecological devastation and health care, education and living wages, and finally the “distorted moral narrative.”


The six weeks will conclude with a mass mobilization rally in Washington D.C. on June 23rd. Participants of the this event are expected to return to their states post-rally to continue building the campaign, which is expected to be a multi-year effort, according to its organizers.


“Fifty years ago, Dr. King called for the poor and dispossessed of all races to unite and take action together — to become ‘a new and unsettling force in our complacent national life,’” Rev. Dr. Liz Theoharis, co-chair of the Poor People’s Campaign said. “Today, all over the country that ‘unsettling force’ has arrived.


“As Dr. King said, ‘We’re here, we’re poor, you have made us this way and we’ve come to stay until you do something about it.’”