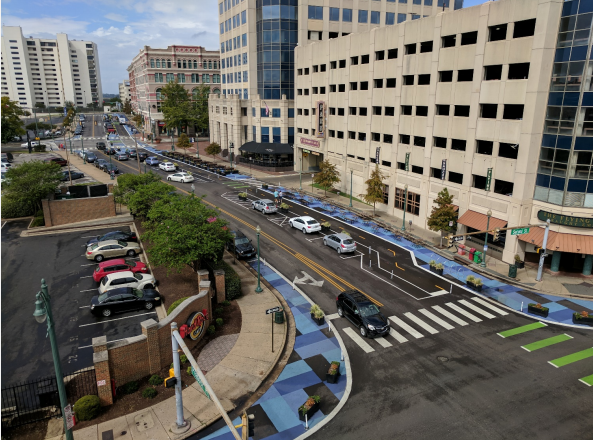 The city announced last week that the pilot project which brought bike lanes and pedestrian spaces to Peabody Place will end this month.


Last June, under the Great Streets Pilot project, car traffic lanes were narrowed on Peabody to make room for a two-way bike lane, a pedestrian promenade, and seating areas.


Now that the 12-month pilot phase is wrapping up, the city plans to remove the bike lanes and promenade, while keeping striped pedestrian bump-outs and shared lanes for bikes. Additionally, a two-way turning lane will be installed along the full length of the street.

However, members of Bike Walk Memphis want the project to remain in place and have started a petition demanding that it does.


The petition calls the Great Streets project a “bellwether for those with aspirations for a better future in Memphis.”


“A year later the city, with little public discussion, is paying more than that to dismantle work by local artists, pedestrian safety improvements, and bike lanes,” the petition reads. “This is an embarrassing lack of respect for the investors, pedestrians, and tourists wanting to experience something more than fast traffic.”


The petition asserts that Memphis is losing the jobs and employees to other cities because other cities are “embracing a healthy culture and more vibrant urban environment.”


“They are investing significantly in walkable places, sustainability, and smart infrastructure,” the petition reads. “They are not simply doubling down on ‘a back to the basics’ approach that reinforces old, expensive, and inefficient systems.”


Urging the city to decrease funding for wide roads, the petition suggests the city invest in “affordable and efficient” options like transit, walking, and bicycling, as the costs of transportation designed for single drivers has “simply become unaffordable in costs per household, health impacts, and land use.”


Specifically, the petition is asking for the Great Streets project to remain in place, more bike lanes and paths in Memphis, restored sidewalks, and “complete” streets with traffic-calming configurations.