Report: Half of Memphis Homes Not Connected to Broadband

Nearly half of Memphis households were not connected to broadband internet in 2016, according to the latest figures from the National Digital Inclusion Alliance (NDIA), ranking the city in the top five least-connected cities in the country.

The NDIA said the data does not indicate the availability of home broadband service but the homes that are connected to it (or not). It looks at cable internet, DSL, and fiber lines to homes. But it does not include mobile service like 3G and 4G networks available on smart phones, tablets, and more.

Poverty likely drives much of the low adoption rates, according to NDIA. Memphis is the poorest metro in the country according to data from the University of Memphis. The city’s overall poverty rate was 26.8 percent in 2016; 44.6 percent of the city’s children live below the federal poverty line.

Income remains the most-influential wedge driving the digital divide, according to data from the Pew Research Center. 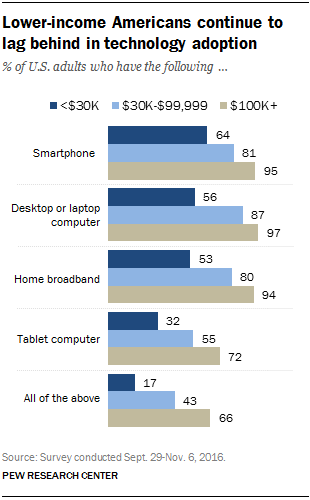 “Roughly three-in-ten adults with household incomes below $30,000 a year don’t own a smartphone,” according to Pew. “Nearly half don’t have home broadband services or a traditional computer. And a majority of lower-income Americans are not tablet owners.

”By comparison, many of these devices are nearly ubiquitous among adults from households earning $100,000 or more a year.”

Without broadband at home, many lower-income Americans turn to their smartphones. Pew Research says one-fifth of adults earning less than $30,000 a year were “smartphone-only” internet users. This means they also use phones — smaller screens — for tasks usually reserved for larger screens, like applying for jobs. 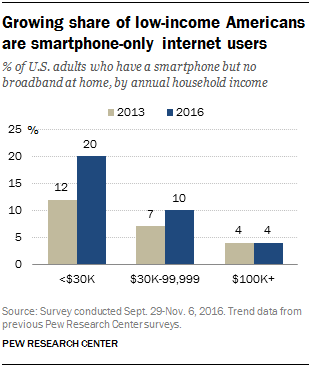