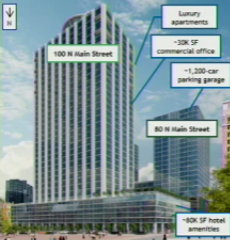 
The hotel is being developed by Townhouse Management Company in partnership with the Lowes Hotel & Co. The plans originally called for converting Memphis’ tallest building at 100 N. Main into the hotel, but representatives with Lowes said the plaza was the best option to create a hotel with a vibrant campus around it.


The convention center hotel is slated to rise 26 floors and house 550 rooms, as well as 55,000 square feet of meeting space. A 1,200-spot parking garage is planned for 80 N. Main next door. The plans also include a restaurant, cafe, and three bars.


McGowen said the convention hotel will be “world class and once again give Memphis the chance to host a significant number of meetings and events.”


“It’s a one-time opportunity,” McGowen said. “We must have the deal closed by end of year and the hotel must be open by year 2023.”

“It’s a one time opportunity,” McGowen said tweet this

The hotel “will be big,” developers said, designed to stand out in city’s skyline, “announcing that Memphis is open for business.”


The goal is span economic development over a two-block area, leading to a “broad revitalization in this portion of Downtown,” developers said. In addition to the hotel, luxury apartments, 30,000 square feet of commercial space, and 65,000 square feet of hotel amenities are planned for 100 N. Main. 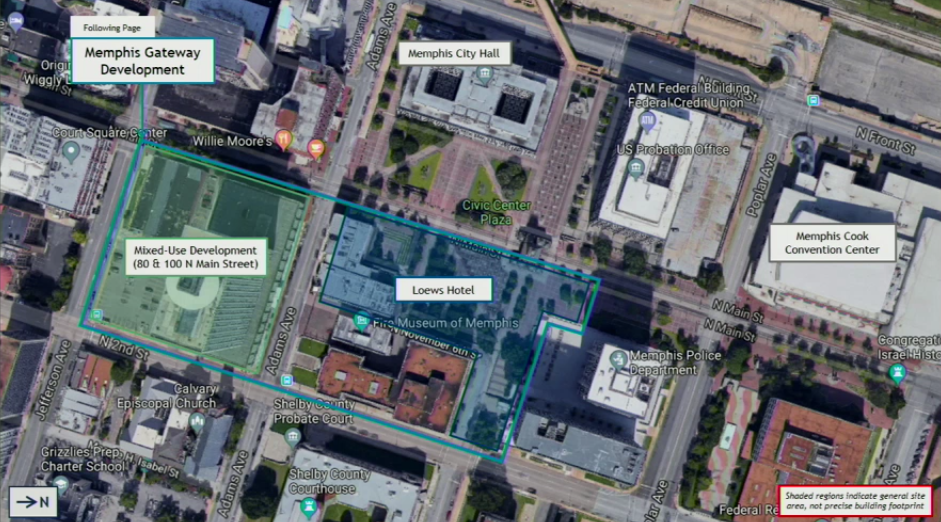 Jonathan Tisch, CEO of Loews Hotels said when a convention center hotel gets constructed, “all boats rise,” other economic development is spurred, and areas become 24-hour neighborhoods. A hotel, along with commercial and residential space, is the “holy trinity,” he said.


The plan was recommended for approval by the council committee, and the full council is set to vote on the issue in two weeks. An up vote will allow the project to move forward in the approval process to be designated as a “quality public use facility” within the Downtown Tourist Development Zone. The State Building Commission also has to okay the plan.