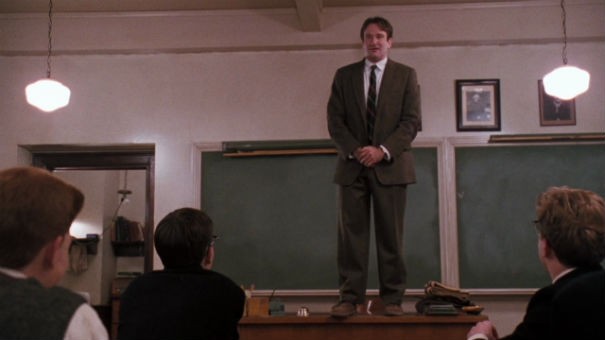 A convicted rapist will get a new trial in part because the Shelby County prosecutor handling the case made part of his closing argument standing on the courtroom desk, to mimic a scene from Dead Poets Society.

The Tennessee Court of Criminal Appeals filed the ruling Friday on an appeal made by attorneys for Maurice Baxter last year. Baxter was sentenced to 58 years in prison in 2016 for the 2012 rape of a 64-year-old woman.

Baxter was linked to the crime scene with DNA evidence. But to drive home a point in his closing argument, former Assistant District Attorney (ADA) Joshua Corman asked the jury to ”try to see things from other perspectives.” To do that he stood on the counsel table in the courtroom, just like Robin Williams’ character in 1989 film Dead Poets Society, according to the appeal.

The trial court’s decision was also overturned, in part, because the defense team’s DNA expert changed sides during the case and testified for the prosecution.

But the appeal’s court disagreed and labeled the act as “prosecutorial misconduct.” Appeals Court Judge Norma McGee Ogle said in the ruling that Corman’s behavior was “childish, not unique.”

“We also fail to see, and the state has not explained, the point of the jury’s needing to ’see things from a different perspective,’” Ogle wrote. “The facts and evidence in this case were relatively straightforward: the victim gave a factual account of a rape, the DNA from the sperm in the victim’s rape kit matched the appellant’s DNA, and the appellant’s driver’s license showed he lived on the same street as the victim.

Weirich said Tuesday that her office had been in contact with the victim and, if the appeal is overturned by the Tennessee Supreme Court, "we are prepared to try the case again."

"The Court of Criminal Appeals reviews every jury conviction. In this case, the jury convicted the defendant of breaking in to the home of a 67-year-old grandmother and raping her repeatedly. He was identified through his DNA.

"As with any case, the trial judge in this case ruled on objections from both the state and defense. One of those objections related to the prosecutor — who is now in private practice — delivering his closing argument standing on a table. The Court of Criminal Appeals found fault with the prosecutor and with the judge for allowing that. For that reason, as well as others, they reversed the conviction.

"Nowhere do they accuse the trial judge of misconduct. And, as is Judge [Thomas] Woodall’s point in the concurring opinion [more on that below], it is unfair to do so with prosecutorial mistakes.

"We have spoken to the victim and, unless the Tennessee Supreme Court reverses the Court of Criminal Appeals, we are prepared to try the case again."

Baxter’s defense attorney objected to Corman standing on the table during the trial in 2016. But Shelby County Criminal Court Judge James C. Beasley Jr. said, “It’s closing arguments. I’ll allow it.” During a motion for new trial hearing, a court official said Corman “made a point.”

“I’m sure that there are those within our profession and maybe on the Court of Criminal Appeals who think that such drama is not appropriate, but I’m not sure that I think that it’s something that if it were exaggerated or carried to extremes might be inappropriate but I think he made a point,” the official said.

Here’s how Corman’s Dead Poets Society moment went down, according to the appeal:

"During the prosecutor’s rebuttal closing argument, he stated as follows:

Remember the movie The Dead Poets Society, with Robin Williams? tweet this
“He plays a teacher in a prep school. He does a thing in the movie where he stands up on the desk, and he has each of the students do it. And the purpose of that is to try to see things from other perspectives.

“I’m asking you to do the same thing in this case. This is a rape case, aggravated rape. There are two defenses in a rape case. It wasn’t me; I didn’t do it. We had sex, but it was consensual.

"The record reflects that the prosecutor was standing on top of counsel table at the time of his argument.

"Defense counsel objected to the prosecutor’s 'standing on a desk as he’s talking to the jurors.' The trial court overruled the objection, stating, 'It’s closing arguments. I’ll allow it.'

"The prosecutor continued as follows:

“Those are the two defenses in a rape case. I didn’t do it, or it was consensual.

“In this case, with [the victim] up there, a sixty-year-old woman, no, you can’t go with this was a consensual sexual encounter. Right?

”So, see things from a different perspective.”

While the opinion called Corman’s behavior prosecutorial misconduct, Appeals Court Judge Thomas Woodall said the label was a mistake. Making such distinctions are the authority of the Tennessee Supreme Court, and the Board of Professional Responsibility of the Supreme Court of Tennessee, he said.

At the time of the trial in 2016, Corman was an ADA with the Special Victims Unit, according to a news release at the time. He is now in private practice, according to his website, which describes him as a “former prosecutor fighting for you.”