A new video shows an SUV pulling a trailer swerving into a group of Memphis-area cyclists.

Cyclist Wes Hale posted the video to YouTube Tuesday. Hale seems to be riding in the rear of about eight cyclists rolling down a rural, two-lane road. A large, Ford SUV with Mississippi plates pulling a rusty trailer emerges closely to Hale’s left side, straddling the middle of the road.

“Before the driver passed, they were less than two feet from my rear tire for about 15 seconds,” Hale wrote in the video’s description.

This could have ended very badly. tweet this
The driver passes quickly, edging closer to the cyclists with every foot. At the end of the video, the driver swerves dangerously close to a cyclist in a pink jersey. The cyclist was riding close to the center of the road. The SUV’s trailer seems to miss the cyclist by only a few inches.

Tulio Bertorini, president of the Memphis Hightailers Foundation, said the vehicle came so close, that the tire rubbed up against the cyclist foot leaving a mark on the shoe.” 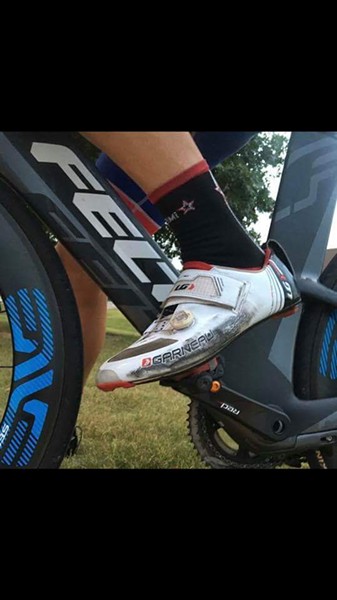 ”Luckily no one was injured or killed in the incident,” Bertorini said. “This could have ended very badly.”

Bertorini said cyclists should always be aware and should always share the road. By law, drivers must keep three feet away from cyclists, though the rule is seldom enforced “as the officer normally has to be present to issue a citation.”

But Bertorini said cyclists are now riding with front and rear-mounted cameras or are carrying them.

Video evidence was enough to convict a Nashville-area driver on charges of reckless aggravated assault when he hit a cyclist on the Natchez Trace Parkway in July, according to The Tennessean.

The move earned the driver, Marshall Grant Neely III, 10 months in prison. The cyclist is now seeking more than $1 million from Neely in a civil suit.