Proposal to Use Alabama Plant for Power Raises Concern

A well-known Memphis environmental activist is leery of a proposal for Memphis to buy its power from a currently incomplete Alabama-based nuclear plant.


The proposal for Memphis to switch from the Tennessee Valley Authority (TVA) to the Bellefonte nuclear plant in Hollywood, Alabama, was presented to a Memphis City Council committee on Tuesday by former COO for TVA Bill McCollum, who is now with the group Nuclear Development LLC. McCollum said that the switch could save Memphis $487 million annually.


Currently, Memphis Light, Gas and Water (MLGW) pays TVA $1 billion a year for electricity. Urging the council not to approve MLGW rate increases, McCollum told the council that “there is a better way to improve infrastructure and help the citizens of Memphis rather than just raising the utility rates and saddling customers with higher bills.”


But, Scott Banbury, the conservation programs coordinator for the Tennessee chapter of the Sierra Club, is skeptical of the proposal. He called it a “financing scheme,” in an email to the Flyer, saying that Nuclear Development is a “self-interested investor.”

“Nuclear Development, LLC has been disingenuous, at best, suggesting that they could lower MLGW ratepayers’ fees by one half,” Banbury said. tweet this 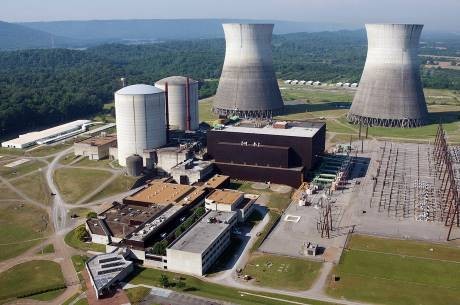 Of the study MLGW president J.T. Young said the utility is conducting on infrastructure needs and energy options for the future, Banbury said he hopes MLGW is looking at “clean, renewable energy sources like solar and wind power to meet our future demands.”


“MLGW CEO J.T. Young is appropriately cautious about wedding Memphis to Nuclear Development’s pie-in-the-sky pursuit of new nuclear power plants when other such ventures are failing all around us,” Banbury said. “Sierra Club is glad that MLGW is pursuing the study of alternate energy providers.”


Banbury suggests that MLGW invest in renewable energy options, which would “significantly reduce costs to MLGW ratepayers and unburden Memphis from financial responsibility for TVA’s bad choices in the past.”


The "bad choices," Banbury said, result in unlined toxic coal ash ponds along rivers throughout the state. He adds that one of those ponds is here in Memphis and is leaking arsenic, lead, and flouride into the groundwater.


Banbury also said that MLGW should break its contract with TVA that bars the utility from making direct investments in local solar generation, contracting windpower from the midwest, and developing substantial energy efficiency.


“Memphis needs to embrace a broad based supply of clean energy — solar, wind, and efficiency — and not be locked into sole reliance on dirty fossil fuels or nuclear energy,” Banbury said. “Sierra Club says yes to breaking with TVA’s 100 percent requirements, yes to embracing renewable energy, and no to nuclear energy.”