A sculpture honoring the history of Orange Mound is slated to go up at Dunbar Elementary School sometime in the spring.


Memphis-based artist Desmond Lewis was commissioned by the UrbanArt Commission (UAC) in partnership with the city of Memphis to complete the project.


The goal of the piece is to enhance the street and crosswalk improvements near Dunbar, while creating art that will “inspire youth to stride for new educational heights” and “reflect the pride and togetherness of the community.”


The project will include seating and a sculpture with handprints of students. The idea “stems from the need to recognize the rich culture of the Orange Mound Community, as well as acknowledging the important hand that the children of Dunbar Elementary have in becoming the next leaders of Orange Mound, the city of Memphis, the United States, and our World,” according to the UAC.

Through the creation of fabricated and forged sculptures, he attempts to address race and equality, while uplifting the community. tweet this

The project is in step with UAC's new mission of looking for new ways for artists and neighborhoods to collaborate to “shape and create public art together.” 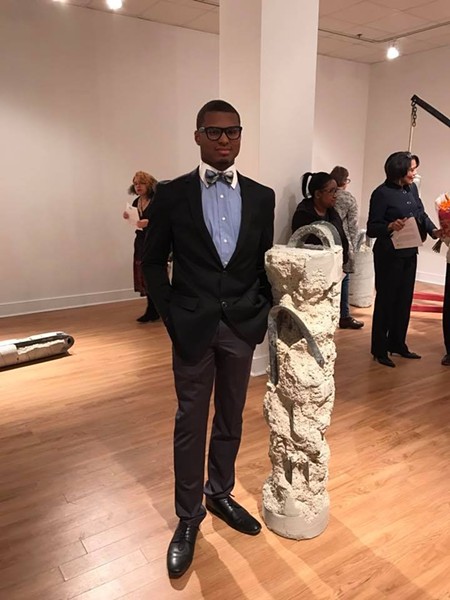 Before the project goes up, Lewis will conduct an “extensive” period of public engagement with Orange Mound residents, Dunbar Elementary students, and community organizations. Lewis hopes to get 300 handprints for the project, as well as a group of nominated residents who will be featured in the sculpture.


The project is funded through the city’s percent-for-art program in partnership with the UAC — an effort to create public art projects across Memphis.

Lewis was selected to complete the sculpture by an artist selection committee consisting of members of the Orange Mound Arts Council, representatives from the city’s Traffic Engineering division and Shelby County Schools, an architect, and two Memphis-based artists.


Lewis, who received a Masters in Fine Arts from the University of Memphis in 2017, has had work exhibited in Tennessee, Missouri, Arkansas, Kentucky, North Carolina, Vermont, South Dakota, and Massachusetts.


Here, Lewis has done work in South Memphis, including signage and seating near Soulsville.


Lewis has been known to use mild steel in his work, as he correlates the invisible appearance of steel in buildings with the concealed structural importance of African Americans in the United States. Through the creation of fabricated and forged sculptures, he attempts to address race and equality, while uplifting the community.