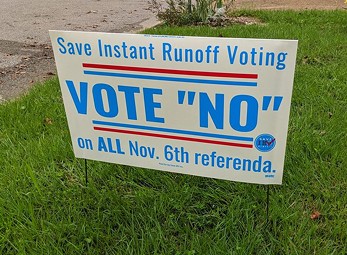 A local group is encouraging a city-wide call-in to demand the Memphis City Council not create any public awareness campaign related to the November 2018 election and its referendums.


This comes after the council voted Tuesday to spend $30,000 to $40,000 on a public information campaign concerning the referenda to explain their "potential benefits to the citizens of Memphis."


Now, the group Save Instant Runoff, Inc fears that the campaign will “distort the democratic process” and will be perceived as “city-sponsored propaganda.” The group agrees with the need for voter education, but not from the council, which they call a “biased body.”


“Today we encourage all outraged voters to call the city council’s office at 901-636-6786 and demand the city council abstain from the development of an ‘educational’ campaign,” Carlos Ochoa, spokesperson of the group, said in a Thursday statement. “The people of Memphis need clear and unbiased information regarding the upcoming referendum, but the city council is not the entity to provide it.”


The group outlined six specific reasons for why they believe the city council to be “biased and incapable of creating a neutral educational campaign”:

• The resolution to allocate upwards of $40,000 for the campaign was not included the in the council’s published agenda, which would have allowed for more public scrutiny.


• Following the council’s Tuesday meeting, Chairman Berlin Boyd and the council’s attorney, Allan Wade, wouldn’t disclose if the campaign would be neutral or not. Then, in the Chairman’s Recap, Boyd wrote “Council approved funding a public information campaign concerning the referenda to explain their potential benefits to the citizens of Memphis,” which is not neutral.

Memphis City Council members are misleading Memphians with the false claim that instant runoff voting would cost the city “in excess of $6 million” to purchase new voting machines. Shelby County Election Commission Elections Administrator Linda Philips has previously stated that our existing voting machines are capable of using instant runoff voting, a fact the City Council has kept hidden from Memphis voters for the past decade.


The Shelby County Election Commission is planning to buy new voting machines, but not because of IRV.


• Chairman Boyd published a newsletter with taxpayer funds urging Memphis voters to vote yes on repeal. The move has been called unethical by some.

• The council hired the lobbying firm Ingram Group to pass anti-IRV legislation at the state level, which would have denied Memphians the opportunity to vote on whether the electoral reforms they approved a decade ago — including term limits — should be repealed.