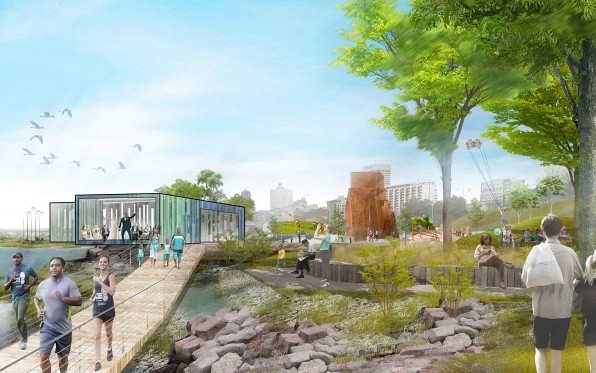 Riverfront redesign got a $5.2 million shot in the arm Thursday thanks to the Hyde Family Foundation.

The foundation made the gift to the Memphis River Parks Partnership (MRPP) to support the redesign of the riverfront from bluff to bank between Carolina and Beale. MRPP will also use the money to fund a new position, the Hyde Fellow in Community Engagement.

“Making a riverfront that reflects the ambitions Memphians have for our city is a major civic statement,” said Barbara Hyde, chair and CEO of the Hyde Family Foundation. “A reinvigorated riverfront – designed by two of the nation’s best design teams – will support a new Brooks on the Bluff and transform the heart of our downtown.”

MRPP is in the midst of a $70 million capital campaign. The money will breathe life into the Memphis Riverfront Concept, delivered from Chicago-based Studio Gang in 2017. The concept is a roadmap to direct locals to a new riverfront. It included new park ideas, markets along Front Street, new cultural amenities there, and more.

So far, nearly $32 million had been raised toward the $70 million goal. With the new gift, the Hyde Family Foundation’s total contribution stands at more than $6.2 million.