Of the 4,200 Memphis Area Transit Authority (MATA) bus stops in the city, only about 300 — or a little over 7 percent — are equipped with both shelters and seating.


John Lancaster, MATA’s director of scheduling and planning, said the ridership and number of boards associated with stops is a major criteria in determining where new shelters should be built.


Lancaster said that 70 percent of the key bus stops where there are more than 25 boards a day have shelter and seating.


“We’re putting shelters where they are most needed,” Lancaster said. “There are very few places that actually merit a shelter.”


Other criteria that’s considered is the comfort level of the stop and if it is a significant transfer point.

“We’re putting shelters where they are most needed,” Lancaster said. “There are very few places that actually merit a shelter.” tweet this

Basic bus stop upgrades are prioritized based on factors like number of boards, the demographics of the surrounding neighborhood, and proximity to a medical facility, civic building, or educational institution.


The agency uses a point system, in which different criteria are assigned a point value. For example, if a bus stop averages more than 50 boards on weekdays, then 40 points are awarded.


If a bus stop is a significant transfer point, it is awarded 10 points. The points from each category are then added together for a maximum total of 100 points. The stop’s assigned point value is taken into account when prioritizing improvements.


Lancaster said MATA is constantly taking inventory of stops, and eliminating and adding stops based on service changes and other factors.


“Many bus stops in town don't have adequate seating or cover from the elements, and often shelters aren't well-maintained,” Davis said. “Some neighborhoods have stops in places where there are no sidewalks, and that can be dangerous for folks who are waiting.”

“People have to stand in the rain and cold,” Hunter said. tweet this

Davis also said that sometimes the ads placed on the sheltered stops is a hindrance to riders, citing instances where bus drivers passed by riders waiting to board because they couldn’t see the riders for the ad.


Sammie Hunter, co-chair of the MBRU and a regular bus rider, said MATA needs to overhaul its bus stops. Hunter routinely catches the 42 Crosstown, which is MATA’s second-most popular route, according to the agency’s officials. Though the route averages about 2,184 riders per weekday, Hunter said “if you look at the stops along the route, you won’t see very many shelters or places to sit.”


“People have to stand in the rain and cold,” Hunter said. “Sometimes we’re tired and still have to wait 20 or 30 minutes at a stop with no where to sit down after a long day of work. It can get uncomfortable from time to time.”


Echoing sentiments made by MATA officials in the past, Lancaster said funding is a major obstacle to making enhancements to the city’s bus stops.


“It’s an ongoing process,” Lancaster said. “The big thing for all of this is funding.”


“We would love to have them at all of our stops, but we just don’t have the money to do it,” Lancaster said. “You can get up to some really, really big numbers pretty quick.” 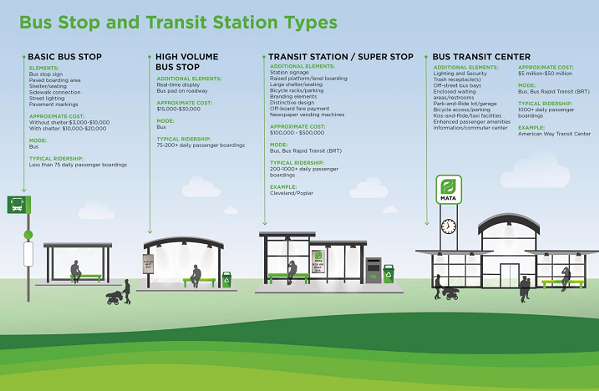 MATA’s ongoing bus stop improvements total $67.8 million. The agency is in the process of making those improvements now, but is “doing it a trickled pace because we just don’t have enough money, manpower, and resources,” Lancaster said.


MATA has to find more local funding sources to “grow the pot,” as local funding is the key to leveraging federal funds, Lancaster said.


Headed by Shelby County Commissioner Van Turner, the committee is comprised of representatives from the city, county, MATA, Innovate Memphis, and the MBRU. The goal of the group is to find dedicated funding sources for the agency.


The committee’s next meeting is scheduled for 3 p.m. on Tuesday, December 11th in the County Administration Building.