With the adoption of brother kittens, Rudy and Ricco, last week Memphis Animal Services (MAS) reached its goal of processing more than 7,000 adoptions and rescue transfers in 2018.


The agency also ended the year with an all-time high save rate of 88 percent, officials announced Wednesday.


“7,000 was a stretch goal, and we honestly weren’t sure if we would hit it this year, but we wanted to try anyway and see if we could save more lives than we thought possible,” MAS director, Alexis Pugh, said in a statement. “But thanks to so much wonderful support from our community, we hit the goal on December 28th and still had several days to add to it.” 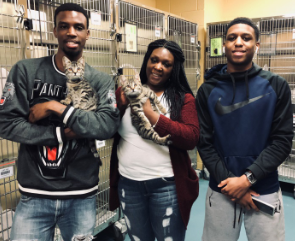 During December, the shelter offered adoption specials “in order to place as many pets as possible in homes for the holidays.” Adoptions of all cats and dogs were $18 compared to the regular fee that ranges from $40 to $80. MAS officials said the promotion led to 16 percent more public adoptions than during same time period last year.