Memphis in May (MIM) officials said Friday morning they received files from the Memphis River Parks Partnership (MRPP) yesterday that will allow them to begin testing how tents and stages would fit in the park during the month-long festival.

This comes after a hotel industry leader said last week he was “deeply concerned” a redesigned Tom Lee Park could negatively impact the festival. However, an MRPP leader said the events will fit and prosper in the new park.

MRPP unveiled its design for the park last week. That plan adds contours, trees, facilities, and more to the now-wide-open Tom Lee Park. MRPP president and CEO Carol Coletta said her team has spent two years and $100,000 focused on the the ongoing success of the festival at Tom Lee Park.

Wayne Tabor, president and CEO of the Memphis Metropolitan Hotel and Lodging Association, said in a letter last week to Memphis Mayor Jim Strickland, that he was told the redesign would reduce festival capacity and attendance. He said this would “reduce the festival’s ability to generate revenue, tourists, room night sales, and would reduce the economic impact of the festival.”

“This concerns us because the month of May has consistently been one of the highest hotel occupancy months of the year and one of the largest sales revenue months for Downtown restaurants,” Tabor said in the letter. “In fact, in 2018 Memphis in May festivities had a $137 million-dollar impact on businesses in Memphis. There are a number of issues we have with the proposed plans.”

Coletta said her team has worked closely with MIM officials on the plan for Tom Lee Park. Much of the design work for the park, she said, has been informed by attendance figures, logistical needs, and event-staging preferences from MIM. The three large fields now present in the plan, for example, were created and sized to handle the three main stages and the ever-swelling crowds for Beale Street Music Festival, Coletta said.

Robert Griffin, an MIM spokesman, said his organization will study MRPP's designs "and expect to have an initial assessment of these tests and the possible resulting impact on our events late next week." After that, MIM president and CEO Jim Holt will answer questions form the media.

Maps drawn up by Studio Gang, the Chicago-based design firm behind Tom Lee Park’s new look, show enough space around the stages to handle the capacity and add more. Those maps show how 18-wheelers would access the park and deliver their loads without ever driving onto the grass. Service vehicles for the festival would also never have to leave concrete paths inside the park.

Tabor said Memphis in May would have to be moved next year during the park’s renovation and revenues lost because of it “could never be recuperated.”

Tabor said the Downtown market now has more than 2,000 hotel rooms and 90 percent of them are booked during the Memphis in May Music Festival and the Memphis in May World Championship Barbecue Cooking Contest. Construction and renovation of new hotels Downtown could soon double the number of rooms there, he said, and "Memphis in May will be an even more critical lodging driver with the expanded hotel capacity.”

Coletta said she expects construction of the new Tom Lee Park design to take 18 months. She hopes to get started in June, right after Memphis in May concludes this year. So, under this schedule, the park would be under construction for the festival next year. 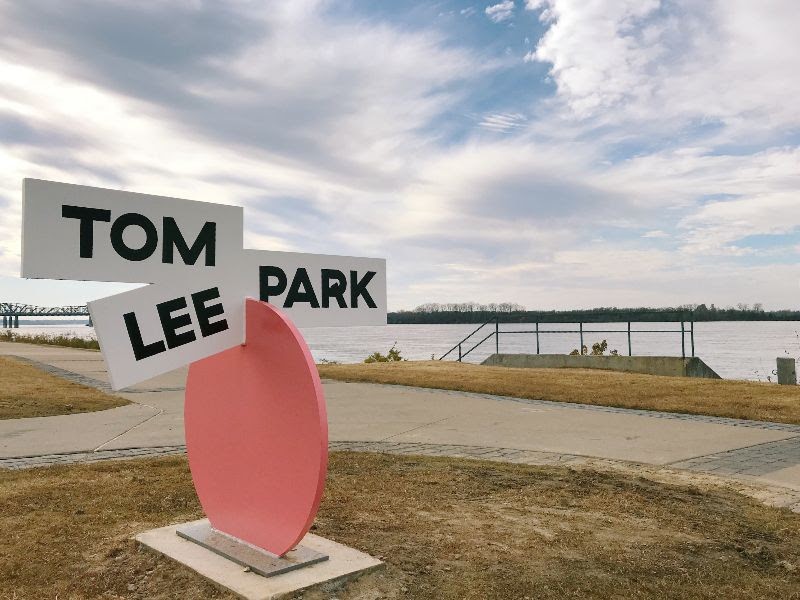 Also, Tabor said the plan would move the barbecue-team tents to Riverside Drive, a move he said would reduce the size of their tents or the number of teams competing.

“Using Riverside Drive for the barbecue competition would also make the contest less appealing or mediocre as it would be just like any other competition around the country — Chicago, Kansas City, Cincinnati, and Indianapolis,” Tabor said. “Using the existing park with the amazing river views enhances the entire experience and makes Memphis in May barbecue competition unique and more than just a World Championship Barbecue Cooking Contest.”

Studio Gang’s plan does not include moving all of the barbecue tents to Riverside Drive. Current configurations show some tents moved to the street but the majority will still be located in the park, on those large, grassy fields designed for the music-festival stages.

Colletta said the final design for barbecue will be strictly up to MIM. Her team was given specs on tent sizes, the number of tents, teams, team membership, overall attendance, and more. They were also given specifics on the logistical needs to execute the event.

With all of it together, Coletta said every, single barbecue tent at Tom Lee Park last year will fit easily into the new design with room for about 40 extra tents. Studio Gang designers even reconfigured the tent layout to give more teams river views, Coletta said.

Tabor also said converting Riverside Drive to a three-lane street would “congest traffic year-round.” When the street is not operating as a four-lane road, traffic gets congested “throughout Downtown,” he said. That traffic, he said, becomes one of the biggest complaints from our guests trying to reach our businesses in the Downtown area.”

Coletta said the current design shrinks Riverside to two lanes. It grows to thee lanes with the run lane at Riverside and Beale. But rather than get rid of the existing asphalt on Riverside, it would be used for parking lots, protected from the street with a barrier.

Coletta said city data, collected from a year-long pilot project that shrank Riverside to two car lanes, showed the move did not increase traffic congestion on other streets Downtown.

Finally, Tabor said in the letter (written last Monday) that he’d not been contacted to review any final plan for the park and indicated that he should have been.

“Tourism is a $3.5 billion-dollar industry in Memphis and supports over 40,000 jobs as we welcome 12 million visitors annually,” he said. “Any change that would affect our industry this substantially needs to be shared with us.”

Coletta said Tabor has been given a thorough tour since he wrote the letter.