Officials: Memphis in May Won't Work at Other Downtown Sites

Memphis in May (MIM) officials say the six locations explored as an alternative sites for the festival next year won’t work and are calling for a phased construction schedule for the redesigned park to allow MIM to return to Tom Lee Park in 2020.

MIM officials said Thursday they were concerned the Memphis River Parks Partnership’s (MRPP) redesign of the park would cut the festival’s capacity. That redesign adds contours, trees, built facilities, and more to the now wide-open park.

MRPP officials want to begin construction of the new design in June, after MIM wrap-up this year. The construction would take 18 months. MRPP president Carol Coletta has said she’s not sure how MIM could operate in what would be a construction site. The suggestion has been to locate MIM to an alternative location for 2020.

The Downtown Memphis Commission (DMC) identified six sites that might work for MIM.

In a DMC document shared to the press Friday, the DMC suggested Beale Street, Mud Island, Greenbelt Park, MLK Riverside Park, Georgia Avenue Elementary, and the grassy area north of Tom Lee Park at the corner of I-40 and Riverside Drive. (See our slideshow below for more details on the sites.)

MIM and the MRPP are scheduled to have a meeting about Tom Lee Park on Monday. 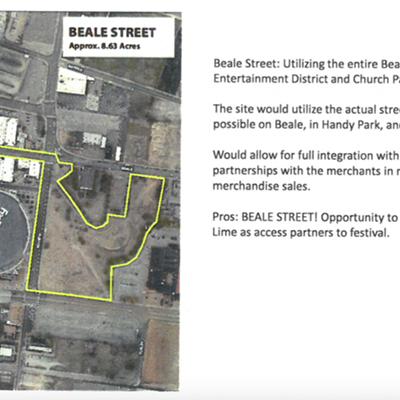