The Memphis River Parks Partnership (MRPP) launched its defense of a redesigned Tom Lee Park as a festival grounds Tuesday morning, touting increased capacity, better drainage “to reduce the mud pit,” and better-planned facilities and utilities for Memphis in May (MIM).

MRPP unveiled its plan for the park last month. It includes hilly contours, built facilities, trees, trails, and more. The plan sparked concerns from some, worried the plan would shrink MIM events and move it to a new location for one year — 2020 — while the new park was under construction.

MIM officials weighed in last week, noting the plan has “issues,” “challenges,” and “problems.” They said the plan would reduce the capacity for crowds, stages, and tents at Beale Street Music Festival and the World Championship Barbecue Cooking Contest.

A new group, called SaveMIM, emerged Monday. Its website calls up similar concerns and asked for more time to negotiate a new plan.

MIM and MRPP were slated for talks Tuesday about the new design.

MRPP’s Tuesday-morning email was titled “how the new Tom Lee Park can be a great host for our major civic festivals.” In it, MRPP officials said the design is built on opinions of more than 4,000 people who shared their vision for the park during the public engagement process, “the successful programs and activities the park supports today, and the detailed specifications of Memphis in May’s annual music festival and barbecue contest.” 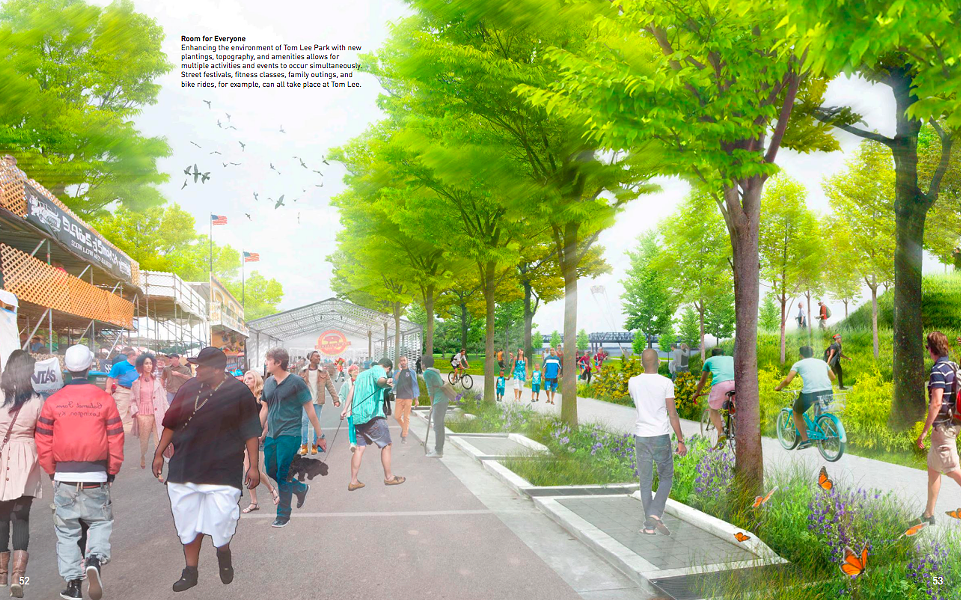 “Building on the Memphis Riverfront Concept, Studio Gang’s first action was to meet with Memphis in May staff and board,” reads the MRPP email. “The first coordination meeting took place in September 2017 to ensure that the specifications for the two event weekends were accommodated in the park’s new design. Once Memphis in May's specifications were known, the park was designed around them.”

”The three great lawns that dominate the park are sized to accommodate more than 30,000 patrons for Beale Street Music Festival,” reads the email. “Assuming six square feet per person, roughly the amount of space you’d expect at a standing cocktail party, the lawns can accommodate even more — 42,000 patrons. The lawns are located next to Riverside Drive for easier access and load-in.”

"Today, Tom Lee Park has drainage issues that combined with the stress of thousands of festival-goers to produce muddy conditions almost annually,” reads the email. “The park is built on an Army Corps of Engineers dike. Beneath a couple of feet of top soil, the material below is heavily-compacted river bed that’s about as permeable as concrete.

“(Under the new plan) the lawns will be hardened with geo-engineered fiber soil, stormwater gardens added, and drainage improved so that the park is less likely to become ‘Memphis in Mud.’ This will also help BBQ teams have a solid footing upon which to build their elaborate team booths.”

A new, permeant feature called Center Court in the design would be used in Tom Lee Park for basketball games and concerts. For MIM, Center Court “is being designed to be easily adaptable as a concert venue so that is can quickly, cheaply, and easily built out as the blues tent of BBG judging court."

The final point MRPP made Tuesday related to concerns from MIM officials that the new design would hamstring its operations, making it more difficult for tractor trailers to move in and out of the park, harder for service and emergency vehicles to move inside the park, and more difficult for music festival and barbecue tents to be erected.

Here’s how MRPP said Tuesday the new plan addresses all of those concerns:

• The new design provides 30-foot-wide sidewalks so 18-wheelers can access each stage footing without needing to drive on any grass.

• Stages can now be built on hardscape (rather than grass) and the appropriate utilities will be easily available.

• Vendors are able to set up on the more than 165,000 square feet of hardscape in the ‘riffle’ section of the park and will find appropriately located utility hookups in place.

• A network of 12-foot-to-19-foot-wide emergency egress paths are located throughout.

MRPP invited the public to view the new plan for the park at the engagement center set up inside Beale Street Landing Wednesday 4 p.m.-7 p.m. And Saturdays noon-3 p.m.

MRPP also invited the public to “#cometotheriver 365 days a year.”