Mississippi River Rising, But Officials Say Not to Worry

The Mississippi River is set to crest here at its fourth-highest recorded level next week, but the city said Friday via Twitter that “it shouldn’t be cause for concern.”


The National Weather Service has projected the river, now at 40.5 feet, to crest here at about 41.5 feet on Wednesday, March 6th. This would be the highest the river has been since 2011, when the river reached an historic 48 feet, partially submerging Mud Island and leaving Riverside Drive completely underwater. 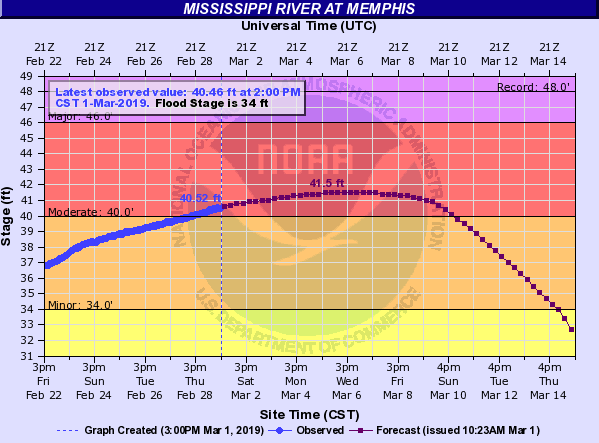 Robert Knecht, director of the city’s Public Works division, said in a video Friday that the water will stay at that level for a few days before it begins to drop. Over the next 30 days, “hopefully we’ll see a significant drop,” Knecht said.


Knecht said the city is “fortunate,” as major flooding should not be an issue. Historically, Memphis has had challenges with flooding, but Knecht said the city has since “invested significantly” to improve the city’s flood control system. The system protects most of Downtown and many residential areas.


“We’re nowhere near what happened several years ago,” Knecht said, citing the 2011 flood. “And it [flood control] worked flawlessly then.”


Knecht said the city will continue to monitor the river, but that right now he doesn’t foresee any challenges.