Council Budget May Be Held for Review of Referenda Campaign Cash

A Memphis City Council member wants to hold approval of the council’s portion of the city’s budget until after a full, public review of the nearly $40,000 the council spent on an education campaign for three referenda last year.

In October before the vote, five council members approved spending money on a “public information campaign” on the referenda to “explain their potential benefits” and “counter some of the misinformation presented.” The campaign was to answer what council members described as a flood of phone calls to their office from the public about the referenda.

Three council members — Ford Canale, Kemp Conrad, and Worth Morgan — voted against the campaign. At the time, Morgan promised that ”every dollar spent by the chairman on this informational campaign will be tracked, accounted for, and made easily available to the public.”

On Wednesday, he said there’s still not been a full accounting of the money. From documents he’s reviewed, Morgan said the money into and out of the campaign don’t match up. He said he understands it could be mathematical error and he said he hopes the discrepancy is an error.

“We need to have a whole accounting of where the money from the city council account actually got spent, and we still don't have that,” Morgan said. “This is a perfect time to review it, ask for it. And if we can't get it, I would be inclined to hold the city council budget until we do.”

We need to have a whole accounting of where the money from the city council account actually got spent, and we still don't have that. tweet this
Morgan asked Berlin Boyd, then the council’s chairman, in November how the funds were spent, according to a story in The Commercial Appeal. At the time, Boyd said he was still waiting on final numbers. He said the money was given to the Carter Malone Group to create the campaign.

That campaign did include advertisements in the Memphis Flyer, The New Tri-State Defender, and IHeartRadio, according to Steve Mulroy, a former Shelby County Commission member and outspoken critic of the instant runoff voting referendum. He said the campaign targeted African Americans.

“They made a conscious campaign decision that the only way to beat these referenda would be to, in my view, falsely suggest that this was somehow bad for African American voters and exploit racial fears,” Mulroy said. “So from their perspective, it was just a smart campaign move, 'we're going to spend the money where we think it would be most effective.'

“But that just underscores and puts in stark relief that this was not in any sense, a public education campaign for the city of Memphis as a whole. It was a targeted campaign effort to defeat referenda that would have made elections more competitive.”

This was not in any sense, a public education campaign for the city of Memphis as a whole. tweet this
Morgan said the campaign was a “serious mistake” and that it just looked bad for council members to advocate for something that would have likely benefitted them.

The resolution for the campaign money never appeared on any city council agenda and came up for a vote toward the end of a regular meeting.

“The reason that's done is to usually is to limit debate,” Morgan said. “If you know something's going to be coming, you know what it says, you're much more able to talk about it and debate it. Then, somebody that might oppose it, they might not even be able to be there to oppose it because they didn't have any notice.

“That's been something that happened a few times on the council over the last four years. Hopefully, there's not any more patience for it and we won't let it happen again.”

The resolution for the campaign passed with same-night minutes, meaning the vote couldn’t be undone at a later date.

Aaron Fowles, president of Save IRV, a group formed to defeat the instant runoff referendum, said the matter is still important even if the referenda were defeated.

“There are still roadblocks that have been erected by Berlin Boyd and others,” Fowles said last month. “Berlin Boyd was on the news saying, ‘people like how they vote now’ and completely ignoring he fact that people voted to use a different method of voting. 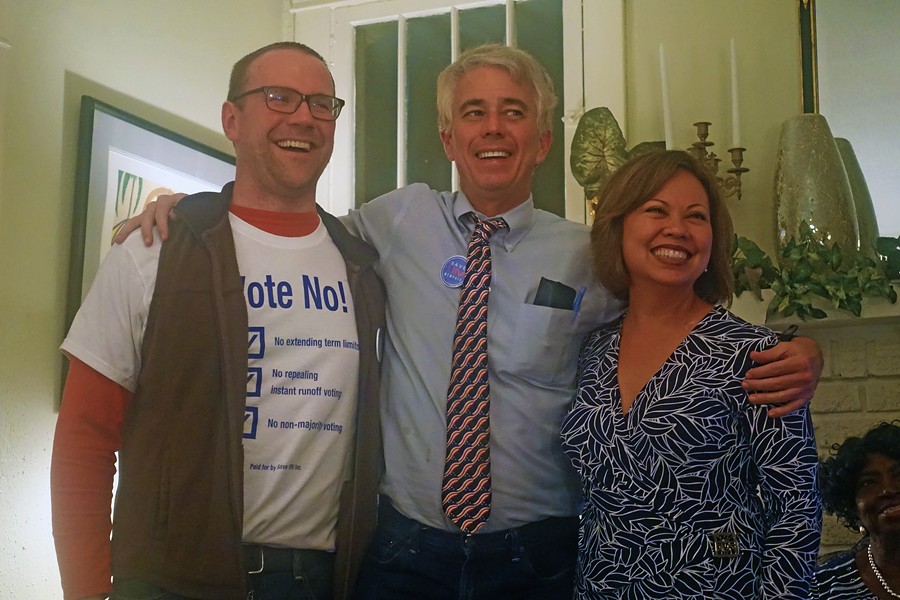 “The city council still has got to do a few things to implement (IRV). You know, we'd like to believe that they will listen to what voters have said and act on that.”

“I think the public needs to understand what happened and how there was a conscious effort to avoid transparency in this taxpayer-funded propaganda game,” Mulroy said.

We'd like to believe that they will listen to what voters have said and act on that. tweet this
The city council is slated to review its own budget for the next year on Monday, May 6th at 4:45 p.m. Watch it live here.