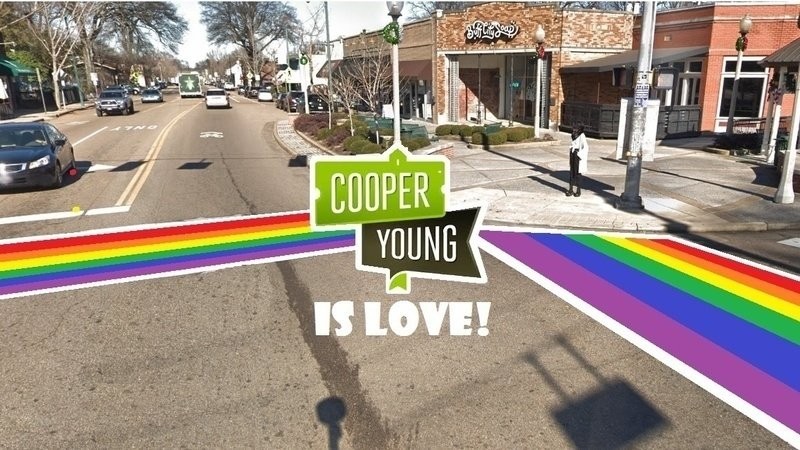 An online petition hopes to bring rainbow crosswalks to Cooper-Young.

Jerred Price, running for the Memphis City Council's District 7 seat, started the petition last week. He said among the neighborhood's "quirky stores," "artisanal coffee spots," and "boisterous pubs" is "one thing you may not know about Cooper-Young."

"...It has the highest density of LGBTQ+ people in the west portion of Tennessee!" reads the petition. "It is also home to OUTMemphis. Through their hard work and sacrifice, they built an 'oasis in the desert of our struggle.'"

For this, Price began the petition at change.org. As of Monday morning, the petition had 603 signatures. It needs 1,000 signatures before the proposal can be submitted to local government leaders.

The move, at least, has support from the Cooper-Young Community Association.

"But one thing you may not know about Cooper-Young is it has the highest density of LGBTQ+ people in the west portion of Tennessee! It is also home to OUTMemphis. Through their hard work and sacrifice, they built an 'oasis in the desert of our struggle.' This organization, known as the Memphis Gay & Lesbian Community Center, became effective on February 23rd, 1989. Whether or not you’ve ever walked through their doors on Cooper Street or attended one of their events, know that they continue to work to make life better for all in our city!

To celebrate our city, which welcomes all within its limits, let's ask the city of Memphis to join other national leading cities, such as Atlanta, to recognize this neighborhood and its people with a rainbow crosswalk!

Memphis is turning 200 years old this year, and it's time for fresh, new, progressive ideas such as this to take place and take us into the next century! Memphis loves everybody! Let's show some love to our LGBTQ+ population!"