White nationalists from numerous organizations held meetings at a Tennessee state park last year and this year and, so far, Tennessee taxpayers are still on the hook for the meetings' security.

That’s according to a recent report from MuckRock, the nonprofit news site dedicated to government transparency. MuckRock reporter Kent Hoover said the groups still haven’t paid the $21,058 bill from last year’s event and federal judge ruled that they didn’t have to, according to The Tennessean.

In May, ”American Renaissance” rented facilities at Montgomery Bell State Park, just west of Nashville. American Resistance is the magazine and website from the New Century Foundation, a group founded by white nationalist Jared Taylor in 1990.

The Southern Poverty Law Center (SPLC) says the Foundation ”is a self-styled think tank that promotes pseudo-scientific studies and research that purport to show the inferiority of blacks to whites — although in hi-falutin' language that avoids open racial slurs and attempts to portray itself as serious scholarship.” The Foundation says it’s "a progressive, nonpartisan think tank that seeks to foster opportunity, reduce inequality, and promote security at home and abroad.”

According to Unicorn Riot, a nonprofit news organization, about 100 protested the American Renaissance conference in May. That group said the state’s security force was large and largely focused on the protestors.

Tennessee law enforcement making a strong showing to protect neo-nazis who've been allowed to reserve their own private resort at the state park. In attendance is the American Identity Movement (formerly Identity Evropa) as well as ex-members of the National Socialist Movement. pic.twitter.com/lG3egYuHgJ

Protestors told Unicorn Riot that they were denied a permit to rent a pavilion more than a half of a mile away from the conference center.


MuckRock reporter Hoover said, for now, taxpayers have to pay for all that protection.

“The extra security needed to prevent Montgomery Bell from becoming another Charlottesville costs money, and the state of Tennessee wants white nationalist groups that rent the conference center to pick up the tab,” Hoover wrote. “For this year’s conference, the state demanded that American Renaissance agree to pay for any extra security costs related to the protests and cover the costs of any damages to the park caused by protesters.”

The groups still haven't paid any money for the added security.

Last weekend, an event called the Nationalist Solutions Conference was held at Montgomery Bell park. That event was hosted by the Council of Conservative Citizens and the American Freedom Party, both white supremacy groups. The conference featured speakers like David Duke, a former KKK Grand Wizard, and James Edwards, host of the Bartlett-based radio show called "The Political Cesspool," which the SPLC calls “racist” and “anti-Semitic.” 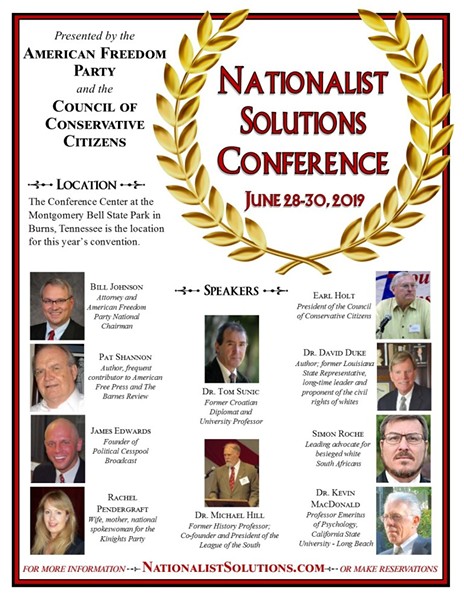 According to news site News2Share, dozens of antifa protestors were there to protest. Its video shows mounted police, a TBI mobile unit, Rutherford County Sheriffs deputies, park rangers, and more.