The half-pound of pot found in Thorne Peters' possession was only for use in a "Cannabag Challenge." And the gun found nearby? Peters was only keeping it safe for him, said perennial Memphis mayoral candidate, Leo AwGoWhat.

Memphis cannabis crusader Thorne Peters tried to convince a state appeals court of this version of his 2015 pot bust recently, hoping to reverse a lower court's decision and get some time shaved from his four-year sentence. But it didn’t work.

Peters entered the public eye in 2009, when he made local news for operating a "4-20" friendly nightclub in Millington. Since then, the self-proclaimed "Poet Laureate of Planet Earth" and “Galileo of pot” beat a cannabis charge, smoked and sold cannabis in front of 201 Poplar, and started the Cannabag Challenge (a spin-off of the ALS ice bucket challenge that involves dumping a bunch of pot on your head in the name of marijuana law reform).

He was arrested in February 2015 on charges of selling cannabis. According to court papers, that’s exactly what he wanted. But he was also arrested for possessing a firearm during the crime, which came with more jail time. That, he didn’t want.

Earlier this year, Peters asked the the Tennessee Court of Criminal Appeals to review his case. On Friday, judges upheld the original ruling and sentence on Peters’ case dealt by the Shelby County Criminal Court.

Court papers from the appeal craft a bizarre narrative of a cannabis proponent following his own rules and taunting Memphis leaders and law enforcement to arrest him — all in the name of legalizing marijuana.

On the night of February 3, 2015, Peters and Harrah were at Harrah’s Orange Mound home on Mariana Street. Police had watched the house all day and saw a lot of foot and vehicle traffic in and around the home. Satisfied that drugs were being sold on the premises, police entered the house.

“At the time officers executed the search warrant, the defendant was at her [Hannah's] home with a large amount of cannabis because he was ‘going to do the Cannabag Challenge, which is like the ice-bucket challenge, with cannabis,’” according to court papers.

What does the Cannabag Challenge look like? Have a look here:

In court, Peters said he did it all so that he “could make them come and arrest me, so I could take on the legal-industrial complex here at the trial of the millennium.”

While Peters told police that night that the marijuana was his and he was selling it, Harrah told them it was really for the Cannabag Challenge. Peters then appealed the marijuana-related charges, claiming he had no intent to sell any of the pot found on the premises.

Police also found a .45-caliber handgun sitting on a floor speaker in a bedroom. It was loaded with a magazine and had a round in the chamber, court papers said, and “was not obstructed in any way.” 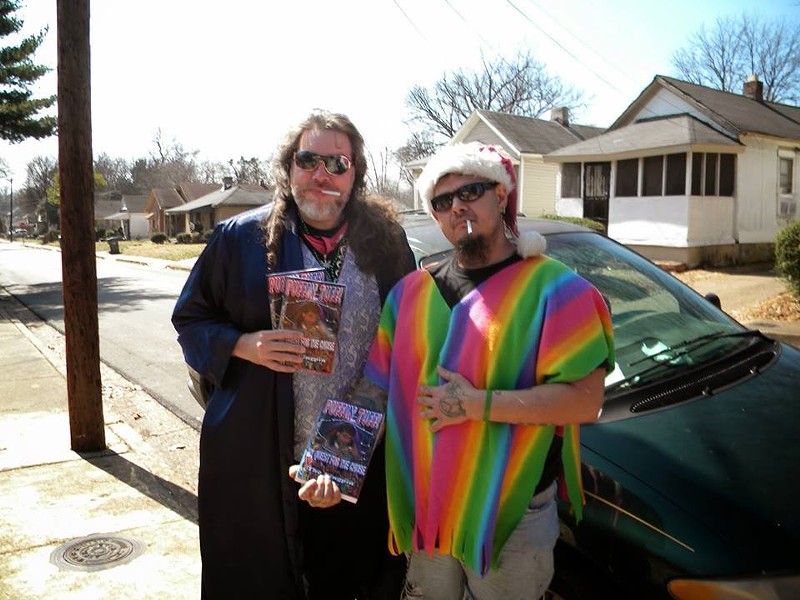 Peters told police that the gun may have his fingerprints on it (it did). But, he said, he didn’t like guns and it wasn’t his. In court later, Peters’ friend and perennial Memphis political candidate Leo AwGoWhat said that the gun was his. Harrah was keeping it for him, he said, because he had children at home.


I will be up all night, armed and dangerous. click to tweet
However, Peters had previously posted a video to Facebook with him holding the gun with this caption:

“I was just sitting around hoping some sorry want-to-be wigger motherfucker was going to stop by with his partner to rob me of all this weed and money I’m holding so I can take target practice on their sorry asses,” Peters said in the video, according to court documents. “If you know anybody that wants to try me, let them know, I will be up all night, armed and dangerous.”

All of this was enough for the state appeals court to affirm Peters’ conviction.

If you want to read the court's full opinion, dive into it here: