A group of conservatives in Tennessee are speaking out against the death penalty. State officials began executions again in Tennessee last year and another execution is scheduled for Thursday night, August 15th.

Nashville resident Amy Lawrence, state coordinator of Tennessee Conservatives Concerned About the Death Penalty, said in a news release, that the death penalty goes against the “basic tenets” of the group’s beliefs, that ”murders should be followed with swift and sure justice,” and that a change in thinking is taking place now on the death penalty in red-state legislatures.

Tennessee Governor Bill Lee announced yesterday that he will not intervene in Thursday’s scheduled execution of Tennessee death-row inmate Stephen Michael West. According to The Tennessean, West was moved into a cell next to the execution chamber in Nashville yesterday and will order his last meal sometime today.

“After thorough consideration of Stephen West’s request for clemency and a review of the case, the state of Tennessee’s sentence will stand, and I will not be intervening,” Lee said in a statement Tuesday.

West was convicted for the 1986 murders of a woman and her 15-year-old child in Union County, according to The Tennessean. West was also convicted of raping the young girl and inflicting 17 “torture-type cuts” to her stomach, according to the paper.

West argued he was present during the murders but he didn’t do it. Instead, he said it was the work of a friend of his from work.

West’s will be the state’s fifth execution since state officials began scheduling them again last year. Before that, the state’s last execution was in 2010, according to the Death Penalty Information Center. There are now 56 prisoners on death row in Tennessee.

Next month, New Orleans will host the first annual national meeting of Conservatives Concerned About the Death Penalty. Lawrence and others from Tennessee will attend. She spoke with us regarding her group and its aims. — Toby Sells

Memphis Flyer: How does the death penalty violate the basic tenets of your group’s beliefs?

Amy Lawrence: I believe that the core tenet of conservatism is small, limited government, and as conservatives, we apply this concept to a variety of issues, whether that be taxation, healthcare, or regulations. This is the same tenet that should be applied to capital punishment.

Simply put, the death penalty is anything but small, limited government. It is a prime example of a bloated, broken government program. It is costly, it risks executing an innocent person, and it leaves the ultimate power over life and death in the hands of a fallible system.

Simply put, the death penalty is anything but small, limited government. click to tweet
MF: You also said that, “murders should be followed with swift and sure justice.” What does that justice look like to you?

AL: Well, it sure doesn't look like years of appeals and decades of court proceedings for the victims' family members.

The death penalty does not provide swift and sure justice but instead drags families through decades of litigation, where in at least half the cases in Tennessee, the sentence is overturned and the convicted receives a life sentence anyway.

Life without parole begins as soon as the trial is over and allows families to at least have some legal finality.

MF: What alternatives to the death penalty does your group hope lawmakers will consider?

The death penalty does not provide swift and sure justice. click to tweet
AL: Tennessee already has a life sentence of 51 years before parole eligibility and life without parole, which does not allow for parole ever. These are the two sentences that the majority of murderers already receive.

Death sentences are on the decline statewide and have been for some years with roughly only two death sentences in Tennessee between 2013-2018. More and more prosecutors seek the alternative sentences because of the cost of seeking the death penalty and to spare victims' families while juries are also less likely to impose death sentences. 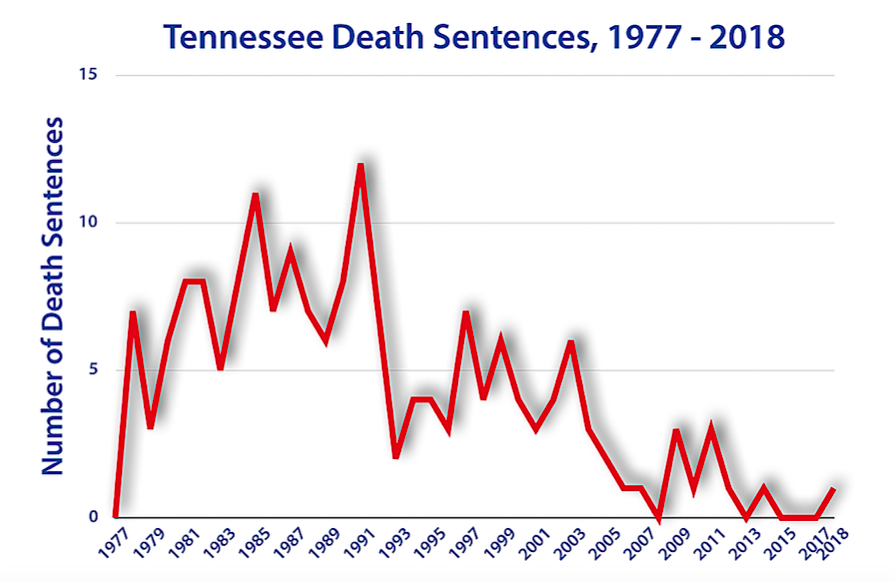 MF: Is an alternative to the death penalty a hard sell in the broader conservative community?

AL: I really focus on what unites conservatives on this issue — limited government, fiscal responsibility, and pro-life stances.

We know that government and human decisions are error-prone. We simply cannot guarantee that we can carry out capital punishment with 100 percent accuracy. While the punishment might be just in some circumstances, we cannot carry it out justly.

We also have limited resources and with death sentences costing $1 to $2 million more than life without parole. I think the majority of people would support having those resources go towards victims' compensation, law enforcement, and mental health programs.

MF: What is the next step for your group in this push?

AL: We continue to educate the public about the shortcomings of our system and will continue to push for laws to make the system more just.

MF: Is there anything else you’d like to say or anything I left out?

AL: Absolutely! If you would like to learn more about our organization, check out our website www.tnconservativesconcerned.org. I'm also happy to talk to civic groups and faith communities about this work.

For more information about Tennessee and the death penalty, visit the Death Penalty Information Center.