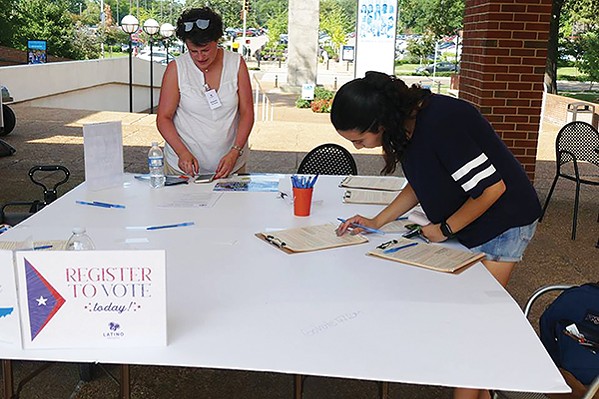 A state law that places restrictions on voter registration efforts was temporarily blocked Thursday by a federal court.


The law, signed by Governor Bill Lee in May, mandates a slew of requirements for those participating in voter registration efforts and penalties for those who don’t comply. It was set to take effect on October 1st.


Trauger wrote that the plaintiffs would “suffer irreparable harm if the injunction is not granted, and that the public interest strongly favors granting the injunction.”


The injunction means the state cannot take any steps to “implement, enforce, conduct investigations pursuant to, or assist in any prosecution” under the law.


Hedy Weinberg, executive director of the ACLU of Tennessee said that Trauger’s ruling “indicates that the court understands the dangerous burdens this law places on organizations simply trying to ensure that as many eligible voters can participate in the democratic process as possible.”


“This decision allows our clients to continue their important work of registering voters — including those who have been historically disenfranchised — this election season,” Weinberg said. “We look forward to the day when this unconstitutional law can be struck down for good.”


The ACLU, along with the Campaign Legal Center and Fair Elections Center filed a lawsuit in May challenging the legislation on behalf of the League of Women Voters of Tennessee, the American Muslim Advisory Council, the Mid-South Peace & Justice Center, Rock the Vote, Spread the Vote, Central Labor Council, and HeadCount. The lawsuit is still ongoing.

“We look forward to the day when this unconstitutional law can be struck down for good.” — Hedy Weinberg tweet this

Danielle Lang, co-director of voting rights and redistricting for the Campaign Legal Center calls the law in question “punitive,” noting that voter registration drives have historically been a way for marginalized groups to gain access to the ballot box.


“This law punished civic organizations for seeking to help register voters, particularly those in underserved communities,” Lang said. “As the court recognized, it struck at the heart of free speech rights and imposed needless burdensome regulations.”


“The court’s ruling recognizes the critical role of these efforts in our democracy,” Cohen said. “Because the court stopped these restrictions from going into effect, the door to participating will remain open to community-based civic engagement efforts to engage fellow citizens, which are so badly needed in Tennessee.”


Earlier this week, the state moved to have the lawsuit dismissed, but Trauger denied that request, saying in her decision that the plaintiffs in the case have presented “plausible claims.” She raised many concerns about the law in her decision, calling the law a “complex and punitive scheme.”


Trauger also cited the low number of registered voters in her decision. There were 4,872,000 voting-aged Tennesseans, but only 3,183,000 registered voters as of November 2018, according to the U.S. Census Bureau’s Current Population Survey.


The U.S. Election Assistance Commission ranked Tennessee 44th out of all states in the percentage of its citizens registered to vote.