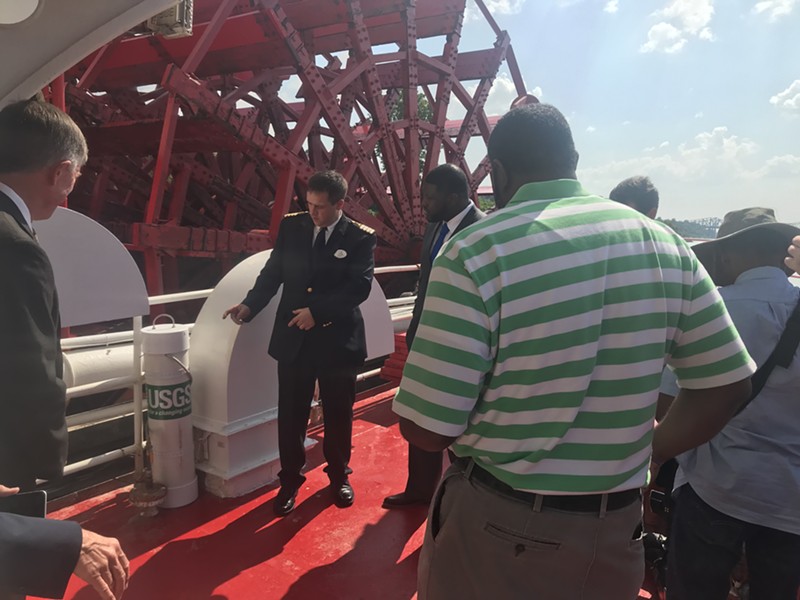 As the American Queen paddles up and down the Mississippi River, it’ll be working hard…for science.

The massive paddlewheeler is now equipped with a sensor from the United States Geological Survey (USGS) to sample water in the river and give real time data on water quality. The new sensor and the data-collecting initiative behind it was unveiled Monday afternoon aboard the ship.

That effort was backed by the Mississippi River Cities and Towns Initiative (MRCTI) and supported by HMS Global Maritime, owner of the Queen, and the USGS.

Mayors and government leaders who gathered aboard the ship Monday said the new sensor will be a tool to help them monitor the pollution in the water so they can better manage that pollution in the future.

The Mississippi River's watershed drains more than 1.2 million square miles, including all or parts of 31 U.S. states and two Canadian provinces. There, cities and farms dump all kinds of pollutants — think sewage, pesticides, and industrial waste — into the river. It was made worse this year with heavy spring rains and high river flows.

All of those pollutants flow into the Gulf of Mexico. When they get there, algae gobble up nutrients from the waste, expand, eventually die, sink, and decompose in the water. This process sucks much of the oxygen from the water, enough to kill most marine life there.

This Dead Zone this year is forecast to swallow 7,829 square miles of the Gulf, according to scientists with the USGS. That agency operates more than 3,000 real-time stream gauges, 50 real-time nitrate sensors, and 35 long-term monitoring sites throughout the Mississippi-Atchafalaya watershed.

But the American Queen’s sensor will the first-ever mobile, real-time gauge deployed on the river. Every five minutes, the sensor will report (via satellite and the internet) information back to scientists on the water’s pH, turbidity, and levels of oxygen and pollution.

Guests aboard the Queen can see that information in real time as they paddle down the river on a kiosk placed in the ship’s chart room. USGS scientists, too, will get the information as will lawmakers from the federal to the local level. That information, it is hoped, will help encourage leaders to keep a closer eye on it and to clean it up.

Memphis Mayor Jim Strickland said city leaders don’t have much say on what can and cannot be dumped into the river. Most of that power, he said, lies with state and federal lawmakers. But more real-time data could help make the case for cleaning up the river.

Strickland said the river is “critical to our economy in Memphis.”

“The Port of Memphis is the second-busiest port on the Mississippi River and the fourth-busiest inland port in the United States,” Strickland said, “not to mention that the river powers our tourism economy.”

Tourism, he said, has an annual financial impact of $3.1 billion here and it supports more than 25,000 jobs in Shelby County.

A USGS official said work is now underway to create a 2.0 version of the sensor and will be deployed soon.