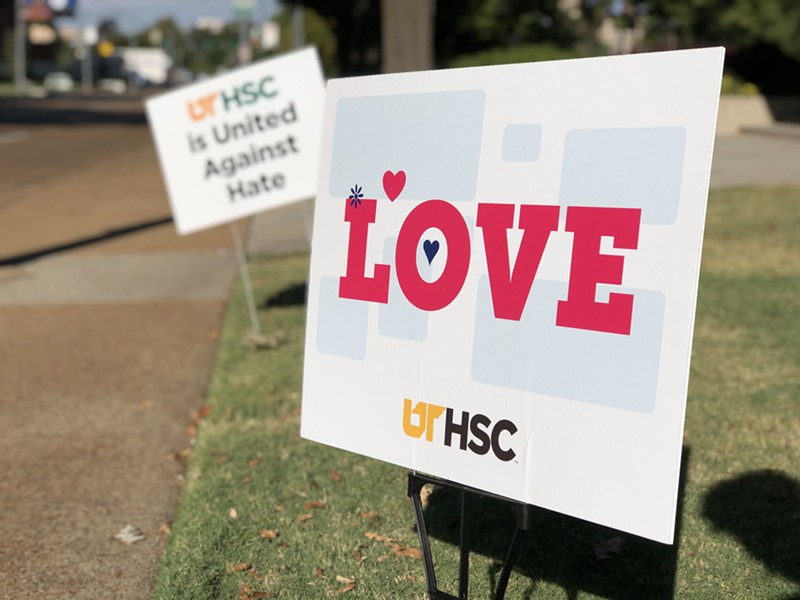 Signs reading “Hate Has No Place at UTHSC” and “UTHSC is United Against Hate” line the sidewalks on the University of Tennessee Health Sciences Center campus here.


The signs are a part of the school’s anti-hate campaign, which began last fall as a proactive response to the various hate crimes and acts of violence that have occurred around the country. This year, officials decided to continue the campaign to reinforce an “anti-hate” message on campus.


Dr. Scott Strome, who was hired as the Robert Kaplan Executive Dean of the UTHSC College of Medicine last fall, helped launch the campaign shortly after beginning his new position.


Strome recalls three sequential hate crimes that had occurred around the country at the time: the fatal shooting of two African-American shoppers by a white man in Louisville, Kentucky, the dissemination of 15 mail bombs to critics of President Donald Trump, and the fatal shooting of 11 in a Pittsburgh synagogue.


These events, which left people around the country feeling “scared and uncertain,” Strome said, prompted the university’s anti-hate campaign.


As an institute of higher education and the state’s only public academic health science university, Strome said it was important to acknowledge that “we need to set value standards and exemplify what we believe is the right thing to do.”


“We believe in diversity in all of its forms — by that I mean color of the skin, ethnic diversity, gender diversity, and all different types of diversity.” Strome said. “When we can bring people who are diverse together, it makes us stronger as a university and stronger as a culture.”


Students learn about the campus’ commitment to anti-hate and diversity at orientation and are reminded throughout the school year with signs and banners around campus.


Celebrating diversity is “critical to the way we think and everything we do,” Strome said.

“That philosophy infiltrates not only their entry-level lectures, but all of all teaching activities because when a patient walks through the door, we want students to be able to care for them in an unbiased fashion no matter where they’re from or what they look like.” Strome said. “That’s being a doctor.”


The key message of the campaign, Strome said, is not only that the university recognizes and welcomes diversity, but “we simply won’t tolerate anybody who directs malice toward another individual for any reason.”


Strome believes “hate starts locally” with jokes that “may seem funny, but are off color and hurtful.” He said the best way to combat that hate is by raising awareness.


With efforts like the current campaign, Strome said his hope is that students and faculty will learn to call out insensitive words or actions, including those said or done in jest, when they witness them on campus.


“When those things start happening, we want the students and faculty to step in and say ‘Hey, that’s not funny,’” Strome said. “‘That actually hurts and that’s not sensitive to who we are today. Stop it.’ So, my hope is that we never have acts that are broadly classified as hate crimes.”


Strome said it's hard to assess the impact the campaign has had on the campus since it was launched last year.

We simply won’t tolerate anybody who directs malice toward another individual for any reason. click to tweet

“The answer is, I think so, but I couldn’t prove it,” Strome said of whether or not the campaign is working to change the university’s culture. “It’s very hard to know what’s in people’s hearts, but there’s a feeling on campus of unity and inclusiveness of everyone that’s really palpable.”


One of the obstacles to having a unified diverse campus is getting students to open up to the possibility of learning new cultures, ideas, and ways of life, Strome said.


“When people come to any of our schools here at UT, they meet with and work with a diverse group of people that is sometimes not like them — we actually hope most folks are not like them,” Strome said. “The greatest tool to combat hate is when you get to know folks on an individual basis and realize ‘this is a person who has a lot of good in them.’ You can find that good through friendships and working interactions. That’s when the positives of diversity really comes out.”


In a city like Memphis where a large percent of residents live below the poverty line and many lack access to healthcare, Strome said it’s important for UT students to understand that being a doctor means caring for “people who don’t have anything and people who have everything. And you have to treat them the same.”


“In order to do that, you have to value every human life the same,” Strome said. “Unless we teach our students that every life matters, then we haven’t done our job or set a template for our students to succeed at a societal level.”


Strome said the campus, nor the world, will “get there right away,” but his hope is that small acts of kindness, as well as diverse friendships and working relationships “will put us on the path to get there.


“I believe hate is the greatest threat to the fabric of our society and I believe as medical professionals, we have a duty to try and remove it,” Strome said. “We’ve been given the privilege to do so.” 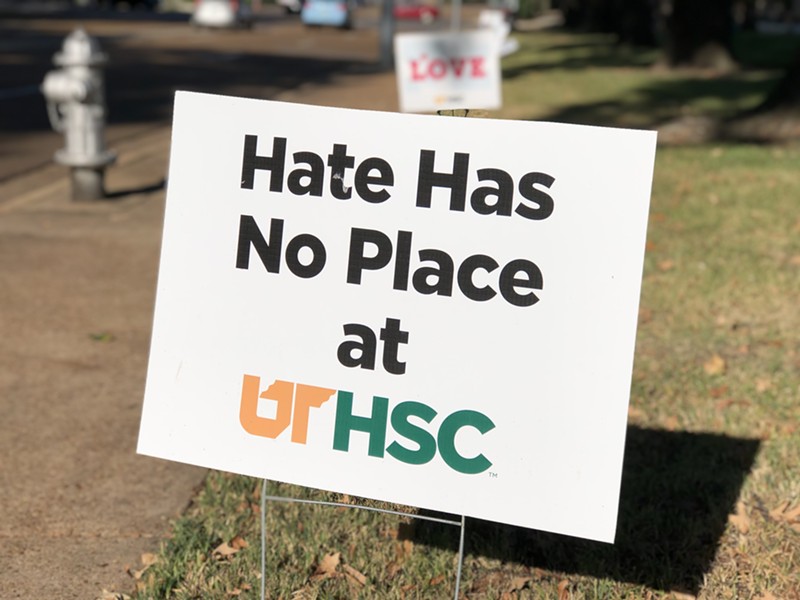 
Kennard Brown, UTHSC’s executive vice chancellor and chief of operations, said though the school works hard to create a culture of tolerance on campus, “you can never negate the human element.” Because of this the school puts measures in place to prepare for acts of violence or other major incidents.


“College campuses have been the site of many catastrophic mass fatality events,” Brown said. “We we want to do everything we can to make sure our campus doesn’t fall into the group of places that have had those unfortunate events.”


Brown said the school would “be remiss to believe that it couldn't happen to us here in Memphis, Tennessee. I venture to say that every one of these institutions where one of these events have taken place at didn’t think it could happen to them either. We aren’t naive to think it can’t happen here” 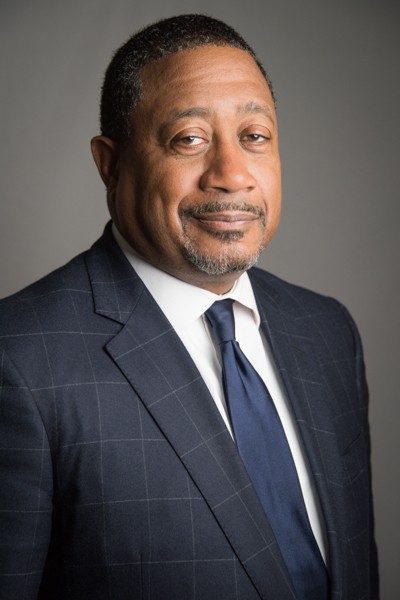 In order to be proactive, Brown said the university has about $30 million worth of security upgrades in the works.


Some of those improvements include installing close to 2,700 additional cameras around campus. “So we literally are watching everything in our environment to the degree that we can.”


Other recent changes include installing automated locking systems and card swipe-controlled entrances, as well as employing security guards to man all of the campus’ public buildings and additional campus police officers.


Brown said UTHSC has more than 40 uniformed police officers who patrol the campus and the broader Medical District: “ We really want our police department to function almost like a precinct of the Memphis Police Department.”


“No security system is all-encompassing,” Brown said. “But we think we thought of most of the elements that we believe will make our environment a secure one if the need arises. As comprehensive as we make it, we still think about it every day. We still make a tremendous effort to stay on the proverbial edge of new technology coming out.”


“The evolution of campus security,” Brown said will be an "ongoing activity.”


Brown said that keeping the campus safe comes with its challenges. One of the major challenges, is limited resources.


“There's so many different demands,” Brown said. “Not only are we trying to keep the lights on, but maintain the infrastructure as well. The state unfortunately has a finite amount of funds and we aren’t the only university here. The state has a tremendous financial burden of trying to keep all of its institutions at par.”


Another challenge, Brown said, is finding a balance between keeping the campus secure, while allowing students and staff to freely navigate the campus. Because UTHSC is a public university, funded by taxpayer dollars, Brown adds that the public has an expectation of having a reasonable amount of access to the campus.

“How to afford faculty, staff, and students the freedom to move around the campus without being too intrusive and restricting their movement is a challenge,” Brown said. “We have some inalienable rights that we want to afford people on campus. Striking that balance between an individual's freedom and privacy and keeping them safe is always a fine balance to strike.”


No matter how many security measures the university puts in place, Brown said they will never be the only solution to preventing acts of violence.


“If you look at the world and what we’ve gone through will all of these mass shootings and other events, I don’t know that what we’re doing is magical enough to stop those kinds of things from happening,” Brown said. “But we certainly want to do our part and stand up and encourage our students, faculty, and staff to embrace a philosophy of tolerance and acceptance no matter religion, sexual orientation, race, or anything. All the security in the world won’t do it. It really is about changing the thought process of those involved.”