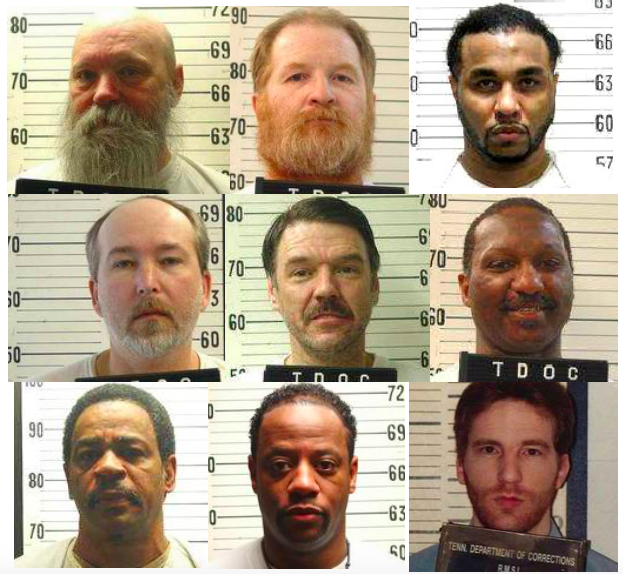 Two of the nine men who could soon be executed by the state were convicted in Shelby County.

Executions began again in Tennessee last year. The last before 2018 was in 2009. The state has executed five men since August 9th, 2018. The latest, Stephen West, was executed by lethal injection on August 15th, 2019.

The Tennessee Supreme Court will now decide whether or not to set execution dates for the nine men Slatery proposed for execution this week. All of them are now on death row at Riverbend Maximum Security Institution in Nashville.

Caruthers and another man were tried and convicted in the same trial. The other man was set free in 2016 after winning an appeal in the case. In February, the Tennessee Supreme Court denied a final appeal for Caruthers in the case.

Pervis Tyrone Payne was convicted in 1988 of the 1987 stabbing murder of Charisse Christopher and her two-year-old daughter, Lacie Jo, in Millington.

Payne’s execution was set for 2007 but was put on hold when Gov. Phil Bredesen put a moratorium on executions to review Tennessee’ lethal injection protocols.

In 2016, Payne was denied a hearing to determine whether or not he was eligible for execution because he is intellectually disabled.

Farris Genner Morris was convicted of shooting and stabbing a man and his niece to death in Madison County in 1994.

Henry Eugene Hodges was convicted of the 1990 robbery and murder of a man in Smyrna. Hodges, 24 at the time, and his girlfriend, 15 at the time, robbed and ransacked a man’s house, stole his bank PIN, and

Donald Middlebrooks murdered a 14-year-old with a knife in 1987. He was convicted and sentenced to death in 1989.

1988 murder of a woman in Chattanooga by hitting her on the head with a board.

Oscar Franklin Smith stabbed to death his estranged wife and

her two teenaged sons in Davidson county in 1988.

Gary Wayne Sutton murdered a man and his sister

In Davidson County, Byron Lewis Black murdered his girlfriend, Angela Clay, and her two daughters, Latoya, 9, and Lakeisha Clay, 6, in 1988.