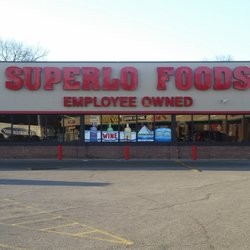 SuperLo Foods is slated to bring life back to a former Orange Mound Kroger that closed last year, opening a new store there by December.


Kroger closed this location at Lamar and Airways and another in South Memphis last year in February, leaving residents in the neighborhood with limited access to a grocery store. But the company announced Monday that it will be donating the former Orange Mound store to SuperLo.

Victor Smith, president of Kroger Delta, said the company has prioritized keeping its promise to the city and Orange Mound.


“Our promise and our purpose to feed the human spirit is what we stand on today as we announce the donation of the former Kroger building in Orange Mound to SuperLo Foods,” Smith said. “We ended the competition between us for a moment to support a city and community we truly love.”


Randy Stepherson, SuperLo’s owner, said the departure of Kroger from the neighborhood made room for another grocer to step in. “The facility is in a good place and in good shape.”


Stepherson said the store will be a full-scale grocer, providing a full selection of fresh produce, meats, frozen food, and dairy products. The store will also house a bakery and deli.


“Access to good food is certainly important,” Stepherson said. “That said, it has to be economically feasible for a business to open a store. In this day and age of large, high-volume, low-margin grocery stores, it is not possible for all areas to have a store within walking distance. There is not enough business for all to survive. That is why most smaller grocery stores have gone away. The consumers took their money to the larger stores.”


Memphis Mayor Jim Strickland was there for Monday’s announcement. Strickland said over the past 20 months, he, along with city councilwoman Jamita Swearengen, whose district houses the future store, have been working with Kroger and others in the community to bring a grocery store back to the neighborhood.


“We are making huge strides to better serve the public,” Strickland said. “But it’s events like these that demonstrate our people in our neighborhoods have strong momentum, too. Orange Mound is a community with a rich history, proud neighbors, and great Memphians.”

Not only will the new store provide residents with access to a grocery store, but it will also bring about 80 full-time and part-time jobs to the neighborhood initially, Stepherson said.

On average, employees will make $13.50 an hour. Full-time employees will receive health insurance that includes family coverage, with SuperLo paying 90 percent of the cost.


For several months, we’ve been working with @JESwearengen @kroger & @SuperloFoods to bring a grocery store back to Orange Mound. I’m pleased to announce that SuperLo will be coming to that community very soon. Thanks to Kroger for donating the bldg (1st time in company history)! pic.twitter.com/EybyyXbQRs