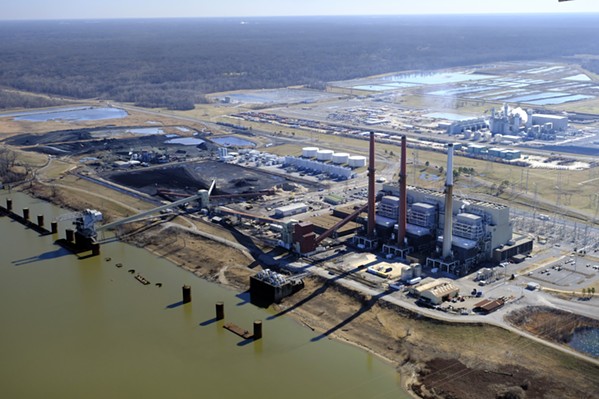 An open meeting next week will focus on the Tennessee Valley Authority’s (TVA) plans for the coal ash stored now at the now-shuttered Allen Fossil Plant in Memphis.

The coal-fired plant was retired last year after the new natural-gas-fired Allen Combined Cycle plant opened. The Fossil Plant’s buildings sit on about 502 acres of land that TVA either owns or leases.

Next week’s meeting will focus on a draft of a document called an Environmental Impact Statement (EIS). It looks at the potential environmental effects of various options to remove the coal ash now stored at the site. That document is available at www.tva.com/nepa.

Here’s how TVA describes the options in the EIS:

“TVA is considering the removal of coal ash to an existing offsite landfill, either by truck, rail or barge, with the option to beneficially reuse as much of the material as possible. That could include construction of an offsite proposed beneficial reuse facility to process the ash.

“TVA has eliminated from consideration the option of closing the ash impoundments in place. TVA does not solely own the property where the fossil site is located, and the proposed actions would make the land available for future economic development projects.

“The options would include closure of the East Ash Pond, West Ash Pond. and Metal Cleaning Pond. TVA has also considered potential environmental impacts associated with the need for fill material such as soil and clay, including the locations of such material.”

For these considerations, TVA is hosting two public open houses. The first will be on Tuesday, October 8th, from 5 p.m. – 7 p.m. at the Mitchell Community Center, 602 West Mitchell Road in Memphis. Public comments on the draft EIS will be accepted at this event.

The second public open house will focus specifically on the draft EIS. It is scheduled for Wednesday, October 30th from 5 p.m. – 7 p.m. at the Benjamin L. Hooks Central Library, Meeting Room C, 3030 Poplar Avenue in Memphis.

Comments on the draft EIS are being accepted through November 25th 2019, and can be submitted online at www.tva.com/nepa, by email to wdwhite0@tva.gov, or by mail to W. Douglas White, NEPA Compliance Specialist, 400 W. Summit Hill Drive, WT 11B, Knoxville, TN 37902.