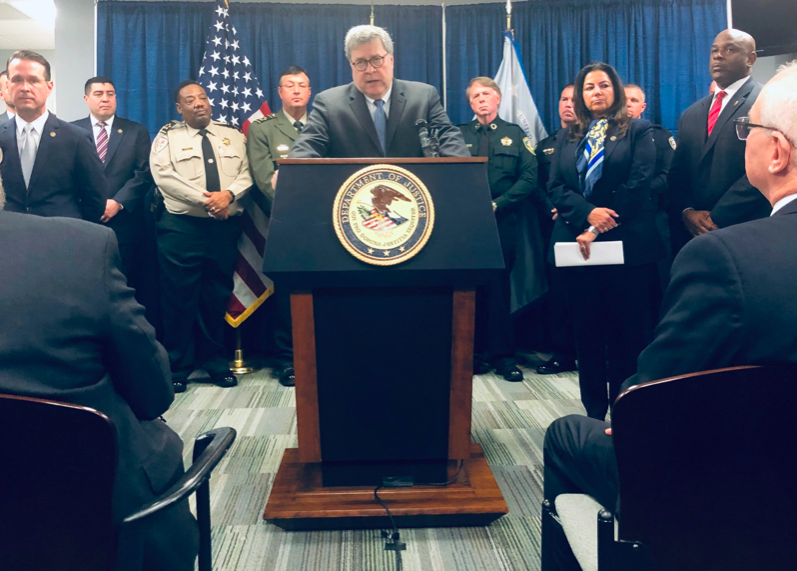 Little is new in Project Guardian. For it, “the department reviewed and adapted some of the successes of past strategies to curb gun violence,” according to a DOJ news release. The project redoubles coordination between federal, state, and local law enforcement agencies.

For this, Brady, the gun-violence-reduction group, said the new plan does not go far enough. The group was named for Jim Brady, Ronald Regan’s press secretary who was shot during an assassination attempt on the president.

“It focuses only on enforcement and increased policing, making no serious effort to address the supply of guns and how they fall into the hands of individuals who have proven themselves a danger to themselves or to others,” said Brady president Kris Brown. “Gun violence is a complex situation and we need policies that address its many facets and underlying causes.

“The Trump administration’s proposed initiative will expand policing initiatives already in place, while making no substantive effort to address common-sense and bipartisan policies like expanded background checks and enactment of extreme risk protection orders (sometimes referred to as ‘red flag laws’), which Americans of both parties support.”

“Under the new Project Guardian initiative, we will intensify our focus on removing firearms from the hands of prohibited persons, and removing dangerous offenders from our streets,” said Michael Dunavant, U.S. Attorney for the Western District of Tennessee. “We are excited to coordinate the implementation of this initiative with our state and local law enforcement agencies to enforce federal firearms laws.

“Rest assured that, with Project Guardian, we will aggressively prosecute the trigger-pullers, traffickers, straw purchasers, and prohibited persons who illegally possess firearms in West Tennessee.”

1. Coordinated prosecution: Federal prosecutors and law enforcement will coordinate with state, local, and tribal law enforcement and prosecutors to consider potential federal prosecution for new cases involving a defendant who: (a) was arrested in possession of a firearm; (b) is believed to have used a firearm in committing a crime of violence or drug trafficking crime prosecutable in federal court; or (c) is suspected of actively committing violent crime(s) in the community on behalf of a criminal organization.

2. Enforcing the background check system: United States Attorneys, in consultation with the Special Agent in Charge of the Bureau of Alcohol, Tobacco, Firearms and Explosives (ATF) in their district, will create new, or review existing, guidelines for intake and prosecution of federal cases involving false statements (including lie-and-try, lie-and-buy, and straw purchasers) made during the acquisition or attempted acquisition of firearms from Federal Firearms Licensees.

3. Improved information sharing: On a regular basis, and as often as practicable given current technical limitations, ATF will provide to state law enforcement fusion centers a report listing individuals for whom the National Instant Criminal Background Check System (NICS) has issued denials, including the basis for the denial, so that state and local law enforcement can take appropriate steps under their laws.

4. Coordinated response to mental health denials: Each United States Attorney will ensure that whenever there is federal case information regarding individuals who are prohibited from possessing a firearm under the mental health prohibition, such information continues to be entered timely and accurately into the United States Attorneys’ Offices’ case-management system for prompt submission to NICS.

5. Crime gun intelligence coordination: Federal, state, local, and tribal prosecutors and law enforcement will work together to ensure effective use of the ATF’s Crime Gun Intelligence Centers (CGICs), and all related resources, to maximize the use of modern intelligence tools and technology.

For Brady officials, Project Guardian does not get to the core of gun violence — the supply of weapons across the country. Two bills passed by the U.S. House that would do that are “languishing” on the desk of Senate Majority Leader Mitch McConnell, according to Brady.

“Instead, the Trump administration has in fact expanded access to firearms, including for individuals deemed dangerous or who should not possess a gun,” said Christian Heyne, vice president of policy at Brady. “Shame on them. These bills will save lives and every day they sit on Sen. McConnell’s desk approximately 100 Americans die from gun violence. That responsibility lies with the Majority Leader and the President. That blood is on their hands.”

Bill Barr now taking questions. He says @realDonaldTrump
supports Project Guardian initiative. Barr adds that legislation on this has been sidetracked by the impeachment process on the Hill.

Bill Barr said he can't get into details about forthcoming Inspector General Report on the origins of the Russia Investigation, but says IG has worked on this report in a professional way.

Bill Barr asked if he believes @realDonaldTrump July phone call with Ukrainian president was appropriate. (the call that's at the center of whistleblower complaint/impeachment inquiry). Attorney General Barr declines to answer that.

U.S. Attorney General Bill Barr asked if @realDonaldTrump asked him to hold a news conference about Ukrainian phone call (as @washingtonpost reported). AG Barr said he does not recall the President making any such request.