University of Memphis associate professor Elena Delavega, made the case for public transportation’s role in addressing poverty to the Shelby County Commission Wednesday.


Delavega, whose research largely focuses on poverty and sustainable economic development, said having reliable transit is “critical” to bringing people out of poverty.


“It promotes business. It promotes economic investment. It allows for more investment in tourism, more use of businesses, more job opportunities,” Delavega said. “In general, an efficient, effective, comprehensive transit system seems to have a very solitary effect on the overall economy and on the economy of poor people.”


Delavega said the median income of those who depend on public transportation here is about $14,500. That’s “very low,” she said, attributing the low income levels to bus riders being “excluded from most of the participation in the economy.”

“In general, an efficient, effective, comprehensive transit system seems to have a very solitary effect on the overall economy and on the economy of poor people.” tweet this

“I want you to think about this for a minute,” Delavega said. “Not everybody has 24 hours in a day. That’s a lie. If you have to spend two, three hours of your day in transit to work, that is time that is not available to work. It’s not available to take care of your family, to read, to study, or to do any of the other things we need to do to advance our lives and our futures.”


Delavega calls it an “issue of critical fairness,” as poor transit “essentially robs time from people.”


This comes as the county commission considers a plan proposed by Shelby County Mayor Lee Harris in September to generate $10 million for the Memphis Area Transit Authority (MATA) each year.


Under Harris’ plan, households with more than two vehicles would be required to pay a yearly $145 sustainability fee.


The additional funds would be used to improve eight routes, while implementing recommendations laid out in the Transit Vision 3.0 Plan, Harris said.


“There are plenty of bright spots in our community,” Harris said. “We see tremendous investment in Downtown and in other places in our community, and we’re quite proud of that momentum. However, our poverty numbers are alarming, and they are growing.”


“I would suggest to you all that that is a sign that we must do something — something transformative,” Harris said. “I believe transit is one piece of the puzzle.”


Brittany Thornton, co-chair of the Memphis Interfaith Coalition of Action and Hope’s (MICAH) economic equity task force, was also at Wednesday’s meeting. Thornton presented an alternative plan to raise the $30 million MATA officials have said was needed in the past to carry out the Transit Vision Plan.


MICAH conducted a survey with 225 respondents gathering input on vehicle fees, as well as on alternative ways to generate funds, such as using funds from expiring PILOTs (payment-in-lieu-of-taxes incentives), implementing parking garage fees, or adding a transportation fee to utility bills.


Thornton reported that 31 percent of respondents supported utilizing expired PILOT funds, 28 percent backed a fee on all vehicles, and 25 percent were in favor of a fee for households with more than two cars.


Of the respondents who support fees on vehicles, Thornton said about 77 percent are in favor of a fee of up to $25 per car, while 50 percent support a fee of up to $50.


Thornton calculates that a $25 fee per residential vehicle and $40 fee for commercial vehicles would yield just under $18 million a year.


Funds from expired PILOTs could add another $8 million. 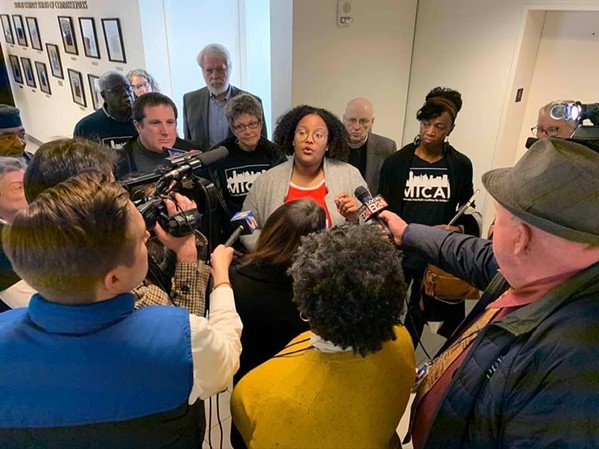 Harris said that the revenues from expiring PILOTs does not “represent a new revenue source for the county.”


Those funds are already accounted for in the county’s budget and placed in the general fund.


“However, I will say Ms. Thornton and MICAH are very much on to something,” Harris said. “And there is a revenue source associated with PILOTs and TIFs, so if it’s the will of this commission to use that as a revenue source to fund transit, as other communities have done likewise, then that could be a new revenue source for transit.”


The commission is slated to vote on Harris’ proposal for a $145 dollar fee on third cars in February.