Zoo Garage Consideration Could Pause Current Plan for a Year 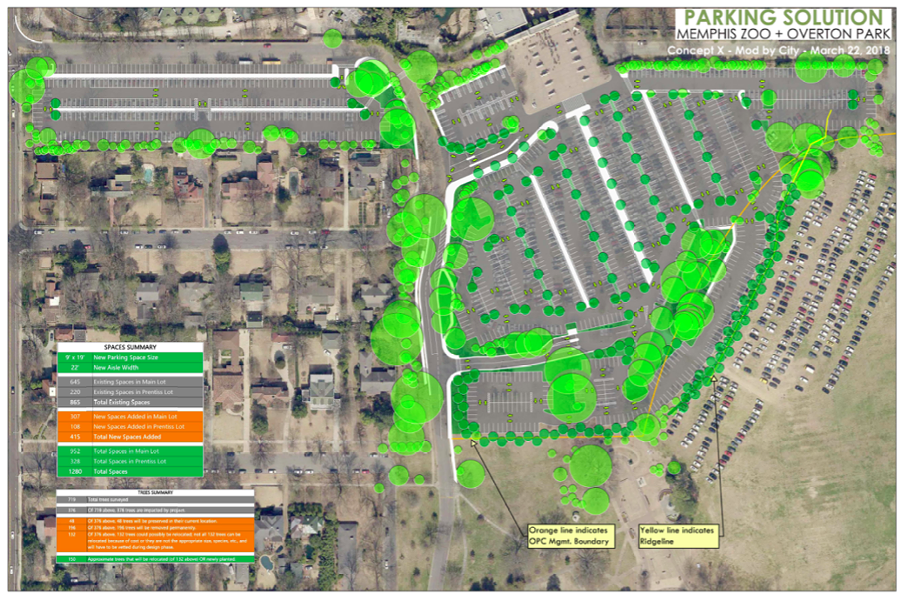 Construction will halt on the Memphis Zoo's new parking lot as officials consider building a parking garage on site. City, Overton Park Conservancy (OPC), and Memphis Zoo officials said Wednesday that the move that could possibly push the current plan back one year.

Work to reconfigure the Prentiss Place parking lot on the zoo's west side near McLean began in August. No work has been done to the zoo's main parking lot. The current plan is a product of months of mediation between the zoo and OPC and hours of work and debate by the Memphis City Council. The plan was expect to end overflow parking on the Overton Park Greensward and be completed next year.

Officials said Wednesday that "overflow zoo parking will continue on the Greensward while the new solution is being pursued and implemented. Should the new solution ultimately not be determined as feasible, work on the original plan will resume next winter."

Work was halted, officials said, as they consider "a promising new structured parking solution that could result in no or minimal lost green space." The garage would be built on the Prentiss Place lot.

The new garage could offer as many as 240 additional spaces on top of an "expanded Prentiss place lot, yielding 348 of the 415 required new spaces, and significantly decreasing the number of spaces needed from an expanded zoo main parking lot."

“After looking into the feasibility of this solution in recent months, we reached out to both the Zoo and the Conservancy to gauge their interest, and both zoo president Jim Dean and the conservancy executive director Tina Sullivan are open to reviewing it,” said Doug McGowen, the city's Chief Operating Officer. “While we have more work ahead of us, we feel optimistic enough about this solution that we should pause before we begin removing and/or transplanting trees from the main lot, which was the next item on the project schedule for expanding the zoo main lot.”

Officials said early looks at the plan show it's "feasible and within the existing cost estimates."

A garage was considered but not included in the current plan. When he unveiled his proposal in July 2016, Memphis Mayor Jim Strickland said the cost of a garage — then quoted at $14 million — was a major constraint on the project. Further, he said the citizens in the nearby Galloway neighborhood voted against a parking structure.

Crews have completed 90 percent of construction on the Prentiss Place lot, which was the first phase of the original, multi-phase plan. The next phase would have involved the removal of dozens of trees, which is best done during the winter, officials said.

"Overton Park Conservancy is grateful for the city's willingness to explore newly available building technology in search of an outcome that preserves green space," said Sullivan in a statement. "Along with the city and the zoo, we fully support pausing the project to pursue a solution that reduces or eliminates any expansion of the zoo's main lot into the Greensward."