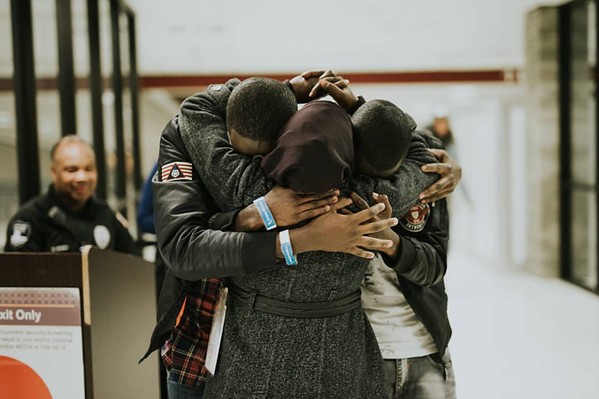 A Tennessee bill introduced this week would require the state and local governments to refuse to consent to refugee resettlement.


President Donald Trump issued an executive order in September, giving states until December 25th to opt in or out of the program. Lee opted Tennessee into the program in a letter to Secretary of State Michael Pompeo in late December.


“The United States and Tennessee have always been, since the very founding of our nation, a shining beacon of freedom and opportunity for the persecuted and oppressed, particularly those suffering religious persecution,” Lee said at the time. “My administration has worked extensively to determine the best outcome for Tennessee, and I will consent to working with President Trump and his administration to responsibly resettle refugees.”


Now, Rep. Bruce Griffey (R-Paris) is sponsoring a bill (HB 1578) which would essentially reverse this move by the governor.


Griffey said he wanted to “get out in front of the issue,” saying that state legislators and local governments did not have a chance to fully weigh in before the governor consented to refugee resettlement in the state.


“I understood the need for the governor to act on the President’s executive order, but to me, as an attorney, that kind of decision belongs to the state legislators and the General Assembly,” Griffey said.


Griffey said he filed the bill primarily focused on the economic impact refugee resettlement has on Tennessee communities, especially the state’s rural communities. Griffey’s goal is to “keep the labor pool tight.”


“If you bring in additional labor to the labor pool, you dilute the pressure for wages to increase,” Griffey said. “We need to continue to push the wage pressure for those at the bottom.”


Griffey believes until the lowest wages of Tennesseeans increase, the government should “put a pause on all refugee resettlement and immigration.”

“I’m more concerned about Tennessee residents than I am about refugees from other countries." tweet this

“I’m more concerned about Tennessee residents than I am about refugees from other countries,” Griffey said. “I don’t have anything against them. I just want to make sure what Tennessee residents are getting paid to do their work is enough for them to survive and take care of their families and not have to work three jobs just to make ends meet.


“My intentions are to put Tenneeseans first and I don’t believe that’s too unreasonable.”


The corresponding bill in the Senate, SB1567, is sponsored by Sen. Joey Hensley (R-Hohenwald). Hensley said, if passed, the bill will give local governments the ability to determine whether or not they want to accept refugees.


“I just want to give the local people and the local government a say in it,” Hensley said. “These are the people who will be living alongside the refugees in their communities.”

Hensley said he and others will likely introduce similar legislation over the next three weeks.

PJ Moore, office director for World Relief Memphis, said the organization is opposed to such legislation. Legislation such as HB 1578/SB 1567 would be “inconsistent with the welcoming culture of hospitality of our state.”


“Amid the highest recorded number of human displacement in the history of the world, it is important that this community remain consistent with the values of freedom, safety, security, liberty, and opportunity,” Moore said. “We also know that there is strength in diversity. The more diverse we are, the better we are for it. It’s the right thing to do.”


World Relief is a global humanitarian and development organization that works with local churches and other organizations to serve vulnerable communities in 20 countries and 16 U.S. cities.


Here in Memphis, Moore said World Relief assists refugees and other newcomers in the immigrant community with finding housing, employment, learning English, and other basic services that “help them find their way in the U.S.”


“For those resettling in Memphis, they face challenges like anyone moving to a new place would,” Moore said. “Just learning the city and the structures in place can be hard. When I moved to Memphis, my most vital resource was a friend from college who helped me get a job, find housing, and where to go grocery shopping.”


Moore said World Relief also helps newcomers navigate the systems that “even those who were born in America have trouble navigating,” such as healthcare and education.


Moore worries that if Tennessee halted refugee resettlement, the state and agencies here would lose federal dollars to assist refugees that are already here or move here from other states: “It would also affect ministries and local churches and their ability to support refugees in this community.”


“It would also affect ministries and local churches and their ability to support refugees in this community.” tweet this

Finally, Moore said the bill would “perpetuate the existence” of separated families in Tennessee. In the past three years, Moore said 90 percent of all the refugees that resettled in Memphis were reuniting with friends or family who they had been separated from “due to horrific circumstances” in their home countries.


Moore also makes the case for the positive economic impact of refugees on the community, citing a 2013 study done by the Tennessee Joint Fiscal Review committee that showed refugees in the state generated $1.3 billion over a 22-year period. During the same time period, the study showed refugees cost the state about $700 million in tax dollars.


“I don’t like to put a dollar value on people,” Moore said. “It’s not the right thing to do, especially when we are talking about some of those most vulnerable people in the world. But if we’re going to look at the cost to our state, we also have to look at the economic benefits refugees bring to our state. When we do that, we see they have an overwhelmingly positive economic influence on our state.” 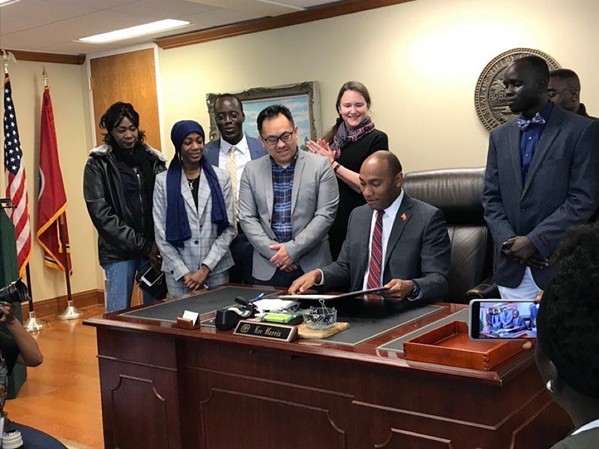 
Harris said the county has a “moral obligation to help those in need.”


“If we are able to help those in the direst of circumstances and still choose not to help, then we abdicate the requirements of principled leadership,” Harris' letter read in part. “We have a moral duty to act.”


Moore called this a “huge win” and a “huge step.”


The number of refugees resettled in Tennessee dropped from 2,049 in 2016 to 692, according to the Tennessee Office for Refugees.


This year, the federal government set the cap for resettlement in the country at 18,000 refugees. Moore anticipates 40 refugees will resettle in the county in 2020, which is “very low,” he said.


“I don’t think we will see that trend be reversed until the number set by the President goes back up,” Moore said. “Those numbers are really suffocating our infrastructure to be able to help the existing families that are already here, as funding is tied to the number of people that are coming here.”


Tennessee is currently involved in a lawsuit against the federal government over refugee resettlement here. The lawsuit was filed in March 2017 against the United States Department of State on the grounds that refugee settlement in Tennessee violates the U.S. Constitution.

The lawsuit was dismissed in March 2018 by a federal judge who ruled there was a lack of standing by the legislature to sue on its own behalf and that the state failed to show that refugee resettlement in Tennessee violates the Constitution.

The Sixth Circuit Court of Appeals upheld that decision in August, also stating that the General Assembly had not established its standing.

In September, attorneys with the Thomas Moore Law Center (TMLC), who are representing the state in the suit, filed a petition asking the appellate court to rehear the case, on the grounds that the court’s decision was “painfully at odds” with Supreme Court precedent. The court denied that request.

Now, attorneys with the TMLC are petitioning the U.S. Supreme Court to hear the case.