A Tennessee lawmaker is looking to create a red-flag law here.


Sen. Sara Kyle (D-Memphis) is sponsoring the red flag or “extreme risk” bill, which would allow law enforcement officers, family or household members, and intimate partners to petition the court to remove a firearm from someone who might be a danger to themselves or others.


Specifically, the SB 1807 provides that if someone has a “reasonable belief that a person poses an imminent risk of harm to the person or others if allowed to purchase or possess a firearm may seek relief” by filing a sworn petition for emergency protection.


The court can then decide to issue an emergency protection order. Within 30 days of that order, a hearing would be held where the petition must prove there is a risk of harm. The court would then decide to extend the order for up to a year or revoke it.


Some form of red flag law has been enacted in 17 states and Washington, D.C.


Kat McRitchie, volunteer lead for the Tennessee chapter of Moms Demand Action, said red flag laws have proven to save lives in states where they are in place and is a “good start for gun control.”


“We know in places where there are red flag laws there is a reduction in gun deaths by suicide and related to domestic violence,” McRitchie said. “This accounts for two huge percentages of gun deaths. Red flag laws best serve the public interest and save people’s lives.”


McRitchie said the group is also working with Rep. Mark White (R-Memphis) on a bill related to firearm storage. As drafted, the bill, HB 801, would make it Class A misdemeanor to leave a firearm or ammunition unlocked in a motor vehicle or boat that is unattended or where someone under 18 is present.


If firearms or ammunition are left in vehicles, they would have to be locked in the trunk, glove box, or elsewhere in the vehicle. Violation of the law would be punishable by a fine of up to $500.

"So I think that we can agree on reasonable standards of responsible gun ownership.” tweet this

The goal is to ensure that guns are not just out of sight, but secured in vehicles, McRitchie said. “Gun thefts in vehicles are a big problem in our state so that’s something we plan to spend a lot of time developing.”


Moms Demand Action is also preparing to oppose any bills that might reduce or eliminate Tennessee’s handgun permitting process, which McRitchie said the group expects to see introduced this session.


Last year, a bill was passed that changed the handgun permitting process in Tennessee and McRitchie said the group doesn’t want to see the process compromised any further.


“I think that is really dangerous for Tennesseans and just a barrier to public safety,” McRitchie said. “We will defend any further weakening of this permitting system.”


Previously, to carry a gun in public spaces, one has to have eight hours training which included live-fire training with a certified instructor and passing a test to demonstrate knowledge of gun safety practices. As of January 1st, one can acquire a general gun permit by just passing an online test with no live-fire training.


“If I took my three kids to the park near our house in 2019 and saw somebody carrying a firearm, I could make a reasonable assumption that they had training with a certified instructor and could fire a gun safely," McRitchie said. "Now, I don’t have that same security. When I see someone with a gun in public now, I can’t expect that they have that level of training. That’s frightening to me as a mom and as a Tennesseean.”

McRitchie said the group would also like to see a bill requiring background checks for all gun sales in Tennessee, but doesn’t legislators introducing such bills this session. 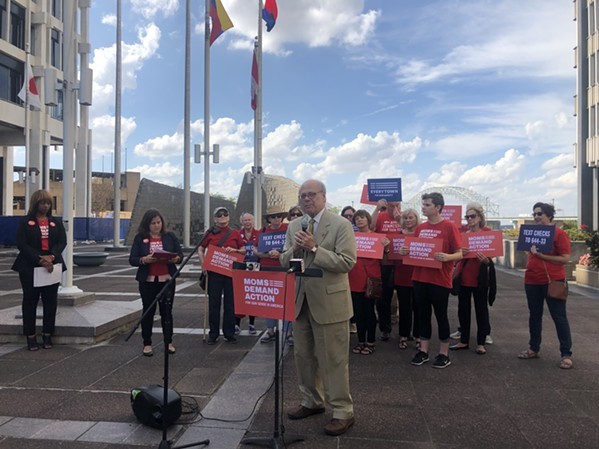 Tennessee has a high volume of online and private gun sales, which can all be done legally without any type of background check, McRitchie said.

Last year, the U.S. Senate passed H.R.8 or the Bipartisan Background Check Act of 2019, which requires background checks on all gun sales, but the House has not followed suit.


In 2019, there 5,188 gun-related violent incidents in Memphis, according to the Memphis and Shelby County Crime Commission. That number is slightly down from 2018 when there were 5,579 incidents and from 2017 when 5,887 incidents occurred.


Last year, Memphis had a total of 1,904 per 100,000 people or about 12,000 incidents. This means violent gun incidents accounted for nearly half of all major violent crime.


Memphis Mayor Jim Strickland highlighted these numbers in his weekly newsletter to constituents last week. Though all violent crime in the city was down by 4.1 percent in 2019 compared to 2018, Strickland noted that the homicide rate increased by 2.2 percent from the previous year.

“That fact was further highlighted this week with the senseless violence that happened over the weekend stealing three young people from their families, their friends, and our community,” the mayor said.


Strickland’s newsletter didn’t specifically mention how the city is addressing gun violence, instead he touted the ways in which the city is working to reduce the overall crime rate.


“We based it on best practices from cities nationwide, and began implementing it as soon as we took office,” he said in the email.


Some of the strategies to reduce crime that Strickland pointed to are rebuilding the Memphis Police Department (MPD), a goal the mayor has stood by since taking office in 2016.


Strickland, along with MPD top brass, have been working to fully staff the department with at least 2,300 officers.


“A fully staffed and resourced MPD is key to our overall efforts — particularly in strengthening community policing,” Strickland wrote.


Strickland said the city is also working to reduce recidivism, increase economic opportunity, and punish violent offenders “to the fullest extent of the law.”


“Though you probably do not feel it, we are making headway,” Strickland said.

“Though you probably do not feel it, we are making headway,” tweet this

McRitchie agrees that there are substantial efforts being made as it relates specifically to reducing gun violence in Memphis, but believes more could be done: “There are lots of good things that are happening in Memphis and I don’t want to discount that. But in a city like ours, where the gun homicide rate is as high as it is, having a centralized task force to look at gun violence would be beneficial.”


McRitchie also believes there needs to be more intervention for youth who have gun-related offenses, comprehensive support for gunshot victims, and a greater effort to remove guns from those convicted of domestic violence offenses.


“Essentially, we would love to see Memphis look at gun violence as a public health epidemic and crisis,” McRitchie said. “I know that should be on the radar of the Shelby County Health Department.”


“It boggles my mind that 100 Americans are dying every day from gun violence and another 200 are wounded by gunshots every day,” McRitchie said.


Growing up, McRitchie said she was aware of the damage gun violence could cause, as her dad worked at the trauma center here.


“As an educator who worked in Memphis City Schools, I’ve walked through gun violence with students,” she said. “I saw what it looked like for people to lose children, and cousins, and friends because they were shot.”


When McRitchie’s oldest daughter started preschool, she said she was urged to took action.


“She came home one day and described playing a silent game in the bathroom with her class,” McRitchie said, “She was describing a lockdown drill to me, but fortunately she didn’t know that. I realized within one generation, we have normalized and accepted gun violence as the status quo in our country. I couldn't do nothing anymore.”


Gun violence happens everywhere in America, McRitchie said: “There’s not a community that’s immune to it.


“It’s not an us or them problem, or a rural problem or a city problem, or a wealthy problem or a poor problem,” she said. “Gun violence is taking lives in every community in different ways. And until we accept it as all of our problems it’s going to continue.”