Floods cost 11 Mississippi-River states $6.2 billion last year, according to a group of mayors representing cities and towns along the river.

The Mississippi River Cities & Towns Initiative (MRCTI) released the finding and more in meetings with federal officials this week in Washington, D.C. There, they are, once again, pushing infrastructure proposals to improve resiliency along the Mississippi River from the “acute shocks and chronic stresses” the region has sustained.

Flooding along the river was worst last year in Wisconsin, Iowa, Missouri, and Arkansas, MRCTI said, with each state incurring flood-related costs of $1 billion-$2 billion.

There is definitely an upward trend click to tweet
“There is definitely an upward trend we can chart over the last few years,” said Bob Gallagher, mayor of Bettendorf, Iowa.“The spatial scale and duration of the 2019 Central U.S. flooding set many records. According to the U.S. National Oceanic and Atmospheric Administration (NOAA), it's plausible to expect this trend to be more frequent with damaging riverine and urban floods to continue.”

The flooding trend is expect to continue this year. While the National Weather Service said last week the 2020 spring flood season is expected to be less severe than last year's, flooding is expected, particularly in the upper and mid-Mississippi Valley.

“This all begs the question of what we’re doing to address these issues and mitigate our seemingly mounting risk,” said Sharon Weston Broome, mayor of Baton Rouge, Louisiana.“Meeting these challenges is part of the reason for the MRCTI visit to Washington, DC.” 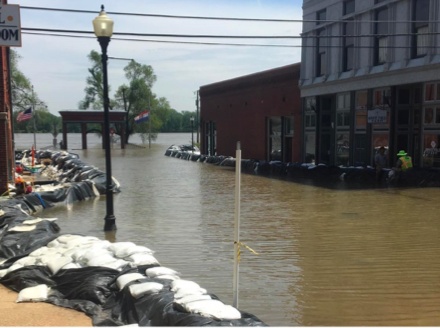 MRCTI officials met with key officials and pushed proposals that would cost $6.85 billion but would mitigate “mounting climate risk,” create more than 128,000 jobs, and generate more than $20.5 billion in economy activity. The money would be spent on improvements to the built and natural environments to protect cities along the river.

Memphis will soon embark upon such an improvement project at the Mid-South Fairgrounds and in the Belt Line neighborhood. But these improvements are thanks not to feds but to private funds and foundations.

Memphis and New Orleans each won money for projects through the very first Environmental Impact Bond Challenge from capital firm Quantified Ventures, the McKnight Foundation, and the Walton Family Foundation.

"Memphis will focus its Environmental Impact Bond on financing a suite of green infrastructure projects concentrated in the Fairgrounds and Beltline neighborhoods to reduce local flooding, improve water quality, provide community green space, and revitalize underutilized areas,” according to a MRCTI news release.