One spooky indication of the magnitude of the coronavirus’ effect on our planet lies beneath our feet. Researchers in Brussels found that — thanks to stay-at-home orders around the world — the Earth itself was shaking less. The Earth’s plates calmed as people stopped driving, flying, or doing human things.

This allowed those researchers with the Royal Observatory of Belgium to hear softer seismic events, like volcanic activity. Officials in Brussels explained that some of the softening was due to the location of their testing station. It was originally built in a remote location but the noisy city grew around it.

Our staff is teleworking. The earth continues shaking. Ground movements at frequencies 1-20 Hz, mainly due to human activity (cars, trains, industries,...) are much lower since the implementation of the containment measures by the government. #StayHome @ibzbe @CrisiscenterBE pic.twitter.com/pGgQAyLuUP

How the seismic noise on our little @raspishake seismometer running in West London (Twickenham) has been affected by the #covid19UK lockdown. This is a month of data for station R091F. The average noise levels are down reflecting fewer trains, buses and cars. pic.twitter.com/WmJLmAO18k

Here's daily mode noise power from a station in Los Angeles over the past month; the drop is seriously wild.


But Memphis has not quieted to this extent. A researcher with the Center for Earthquake Research and Information (CERI) at the University of Memphis said it monitors earthquakes at testing sites from East Tennessee to the Missouri bootheel. Most of these, he said, are in remote locations.

“People make noise,” said Dr. Mitch Withers, associate research professor with the CERI. “That’s why, generally, we try to locate our seismic stations away from people.”

The CERI operates about 140 stations in nine states across two seismic zones. The New Madrid Zone runs from Marked Tree, Arkansas to Dyersburg, Tennessee and then runs all the way to the Missouri bootheel. The East Tennessee seismic zone starts in northeast Alabama and then into northwest Georgia and on to the Tennessee/North Carolina border.

For now, Withers said he and other researchers here just aren’t seeing the calming effect seen in other parts of the world. Again, it’s simply because the CERI’s stations are in remote locations.

However, the researchers here are seeing that traditional diurnal change. Human noise levels, mainly vehicle traffic, fall at nighttime and rise during the day. This is why Withers and researchers here can detect smaller magnitude earthquakes at night.

Withers checked rural stations across the CERI system. This is the graph of noise levels at Shelby Forest on Tuesday.

This is the graph from Obion County, just north of Dyersburg, from Tuesday. 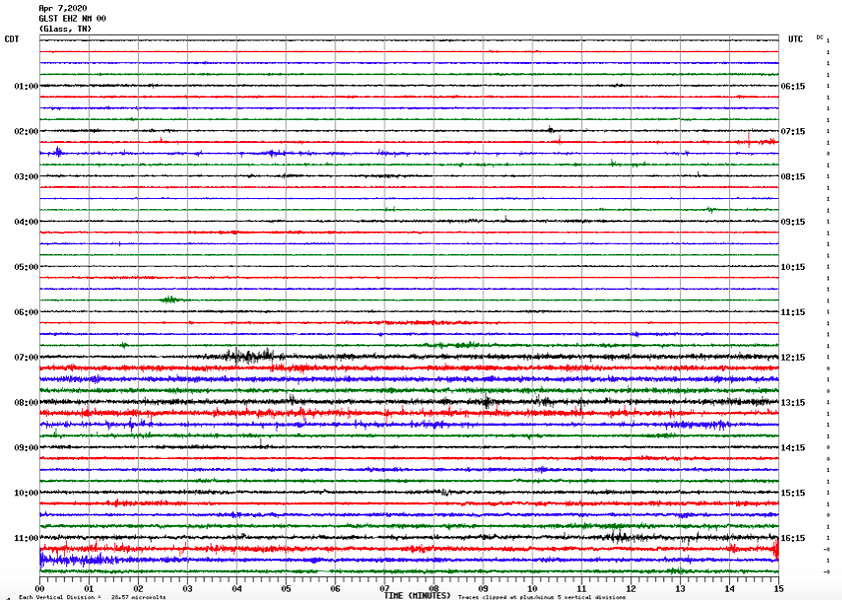 Both show noise levels from midnight at the top to midnight at the bottom. Both show that diurnal, day/night shift in noise. But neither, he said, show an overall reduction in noise that could be attributed to stay-at-home orders.

He also checked the station based on the U of M campus. Though these lines show only 24-hour data, Withers said it does not show any noise reduction.

“It really hasn’t changed that much since early March up through to today,” Withers said. “Humans in Memphis are making just as much noise today as they were a month ago.”

Asked about the area’s “general earthquake situation right now,” Withers said there is still a 10 percent-15 percent chance of a damaging earthquake in the next 50 years.

Humans in Memphis are making just as much noise today as they were a month ago. click to tweet
“So, you need to to be prepared for earthquakes as you do for pandemics, tornadoes, and hurricanes,” he said. “You need to have your couple of weeks of supplies on hand. If there’s an earthquake, you need to be prepared to drop, cover, and hold on.

“That still could happen. So, that’s why we’re continuing to be on the job during the virus.”