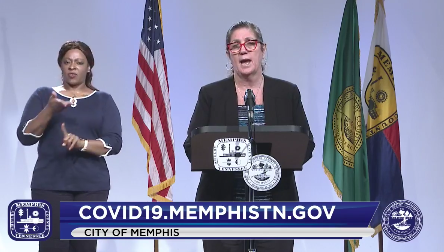 Recent high rates of the coronavirus in Shelby County were “alarming“ to many, health officials said here Tuesday, but the jumps were likely caused by high testing days and lags in reporting from laboratories.

More than 380 new cases of the virus were reported Friday, easily setting the record for the highest number of new cases reported in Shelby County in one day. The figure was over 200 on Saturday but was down to 44 on Sunday. The surge in cases made some, like County Commissioner Tami Sawyer, wonder if the county too quickly loosened restrictions on businesses and gatherings.

Dr. Alisa Haushalter, director of the Shelby County Health Department, gave many reasons for the spikes during Tuesday’s briefing of the Memphis and Shelby County COVID-19 Joint Task Force, but noted they “were alarming to many people.”

Still, Haushalter said community transmission is happening and at a higher rate. The positivity rate needs to be under 10 percent, she said. The number pushed up over 11 percent over the weekend and has come back down since then.

Haushalter said the spikes in cases are not directly linked to the Memorial Day weekend holiday nor the protests against police brutality. She said people are simply out enjoying the warmer weather and are not wearing face masks. However, she did note an uptick of people wearing masks again.

For all of this, Haushalter said the county will remain in Phase II of the Back to Business plan “for the foreseeable future.” If the numbers continue to rise, the county runs the risk of returning to the more-strict Phase I of Back to Business but that’s not what task force members want, she said.

For now, the task force will focus on identifying clusters of new cases and addressing them. It’ll also work on emerging trends in the community that may serve as barriers to people not wearing masks or social distancing, Haushalter said. For example, she said someone may go to work sick if they worry they may get fired or could not pay their rent.