The number is not the number of new cases on tests given yesterday. Tests results are now rarely returned within 24 hours and can take up to eight or more days. The new-case count comes from numerous tests over numerous days from numerous laboratories.

The latest weekly data available shows 14.7 percent of all tests were positive for the week of July 5th, a slight increase over the 14.2 percent of positive tests reported the week before. The weekly average positivity rate has grown steadily since the 4 percent rate recorded for the week of May 4th, just as the county's economy began to reopen.

The county's overall average positive rate for COVID-19 was 9.7 percent Tuesday on all test results reported since the virus arrived here in March. The seven-day rolling average of daily tests rose to 15 percent on July 9th, according to the latest data. That figure was 15.7 percent on July 16th.


The total number of COVID-19 cases here stands at 17,255. No new deaths were reported from Monday morning. The death toll rose by seven in Shelby County and now stands at 251. 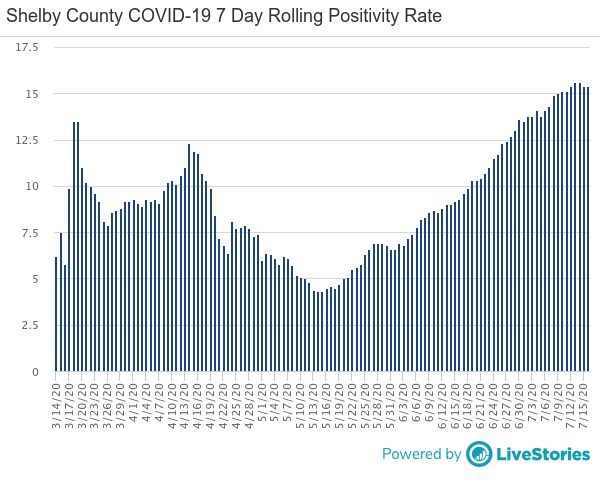