Pediatrician: ‘No Good Choice’ for Schools, Contact Sports ‘Not Safe at This Time’ 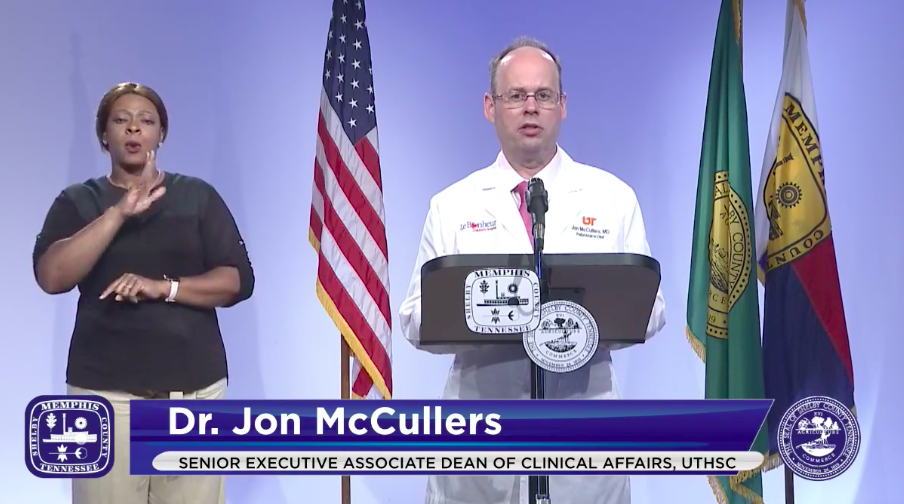 No good choice exists for parents of Shelby County school children heading into the 2020-2021 school year this year, and contact sports, like football, are not safe.

That's all according to Dr. John McCullers, Pediatrician-in-Chief at Le Bonheur Children's Hospital and a professor in and chairman of the Department of Pediatrics at the University of Tennessee Health Science Center. McCullers’ remarks came during Thursday’s press briefing of the Memphis and Shelby County Joint Task Force.

McCullers said he and others at Le Bonheur had received numerous calls from school districts, parents, and local leaders for advice on how to approach the coming school year as the COVID-19 pandemic continues. So, nearly three weeks ago, he and others formed the Back to School Task Force at Le Bonheur. The group has since issued a set of guidelines and published other resources on the Le Bonheur website.

The main questions McCullers said the team has heard over the many weeks are: Should schools be opened or closed? Should I send my child to school?

Sending students back could boost transmission rates even further, with students spreading coronavirus at school and bringing the virus home to parents and grandparents. However, “having kids in school is the best way for kids to learn.” In the end, though, McCullers said school officials and parents have to make individualized choices about it all.

Dr. Alisa Haushalter, director of the Shelby County Health Department, said there are “inherent risks” on contact sports. But she said the task force would wait to make a formal statement on whether or not to hold events until it received the exotic language from an executive order from Tennessee Governor Bill Lee.

It is not safe to go back to contact sports like football. tweet this
McCullers said, as member of the task force, he, too, would wait on Lee’s order. But his opinion as a pediatrician was straightforward.

“It’s clear from a medical perspective that with the degree of transmission in out community, it is not safe to go back to contact sports like football,” he said. “I can’t say what the transmission rate would need to be [before such sports could resume], but it is not safe at this time.”