November 04, 2020
comment
COVID-19 Memphis
Infogram
New virus case numbers rose by 124 over the last 24 hours, putting the total of all positive cases in Shelby County since March at 38,476. That figure topped 35,000 only two weeks ago.

The Shelby County Health Department reported that 1,371 tests were given in the last 24 hours. Tests here now total 564,334.

The latest weekly positivity rate surged more than 1 percent from the week before.The average rate of positive tests for the week of October 18th 8.7 percent. That's up over the 7.2 percent rate recorded for the week of October 11th. The new weekly average rate is the highest since mid-August, just as cases began to fall from a mid-July spike that had a weekly average positive rate of 12.7 percent. The new weekly positive average marks the fourth straight week that the rate has climbed.

Total deaths rose by six in the last 24 hours and now stand at 580. The average age of those who have died here is 73, according to the health department. The age of the youngest COVID-19 death was 13. The oldest to die from the virus here was 100.

There are 8,201 contacts in quarantine. 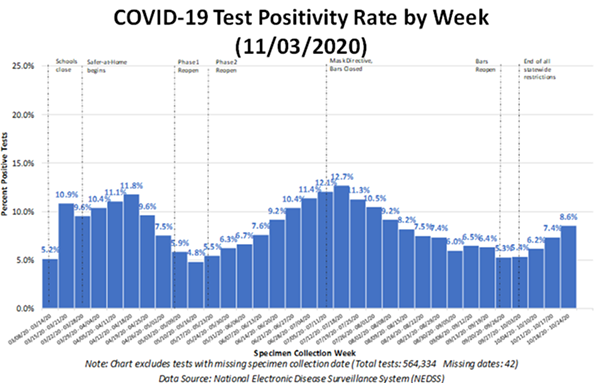