New virus case numbers rose by 697 over the last 24 hours. The daily number is the third-highest daily total of the pandemic. The record was 835 on November 17th. The second-highest daily case count was 700 on July 14th. The new total puts the total of all positive cases in Shelby County since March at 53,058.

Total current active cases of the virus — the number of people known to have COVID-19 in the county — rose slightly to 3,595. The figure had been as low as 1,299 in September and rose above 2,000 in October. The new active case count represents 6.8 percent of all cases of the virus reported here since March.

The Shelby County Health Department reported6,392 tests were given in the last 24 hours. Total tests given here since March now total 709,648. This figure includes multiple tests given to some people.

Area hospitals are again straining with high patient numbers. There were 2,247 patients in acute care beds here, putting occupancy rates at 92 percent. Of those patients, 313 were COVID-positive. Only 192 acute care beds were available Wednesday morning. Intensive Care Unit (ICU) beds were 92 percent full. Only 39 beds were available Wednesday, putting occupancy at 92 percent. Of the 405 patients in ICU beds now, 150 are COVID-positive.

The latest weekly positivity rate rose to a record 12.9 percent for the week of November 22nd. The new rate beat the previous record weekly average rate of 12.7 percent set in the week of July 12th. The weekly increase came after the rate fell the week before. That fall was the first time the figure had gone down in seven weeks.

Six new deaths were recorded in the last 24 hours and the number now stands at 722. The average age of those who have died in Shelby County is 73, according to the health department. The age of the youngest COVID-19 death was 13. The oldest person to die from the virus was 101.

There are 8,359 contacts in quarantine. 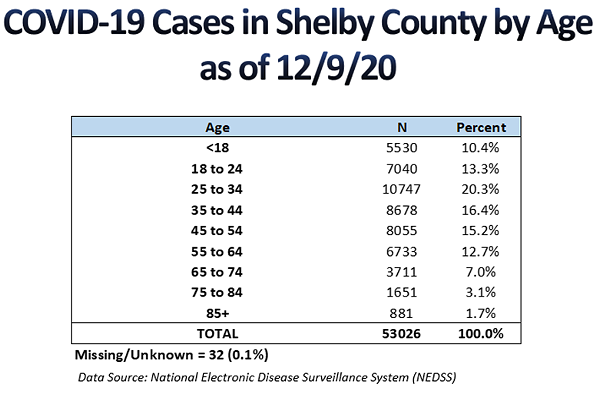