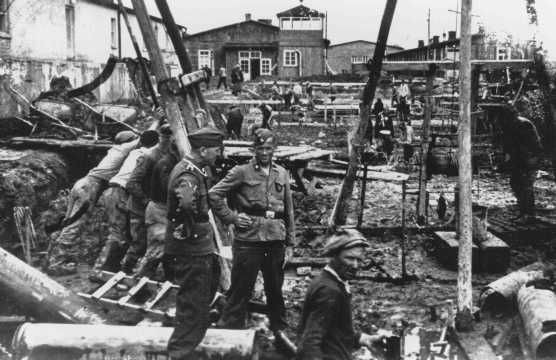 German officials will not prosecute a man who served a guard at a Nazi concentration camp and was ordered to be removed from the U.S. by a Memphis court in March, according to the Associated Press.

Prosecutors in the city of Celle said they were unable to dispute the account of Friedrich Karl Berger, 95, and dropped the case. Berger told officials he was a guard at a camp near the Neuengamme concentration camp for a few weeks near the end of the war but has said he did not observe any abuse or killings.

Berger, who has lived in the U.S. since 1959, was ordered to leave the U.S. in March by a U.S. Immigration Judge in March after a two-day trial in February. The judge issued an opinion finding Berger removable under the 1978 Holtzman Amendment to the Immigration and Nationality Act because his “willing service as an armed guard of prisoners at a concentration camp where persecution took place” constituted assistance in Nazi-sponsored persecution.

Berger, 95, has lived in the U.S. since 1959. tweet this
The court found that Berger served at a Neuengamme sub-camp near Meppen, Germany, and that the prisoners there included “Jews, Poles, Russians, Danes, Dutch, Latvians, French, Italians, and political opponents” of the Nazis. The largest groups of prisoners were Russian, Dutch, and Polish civilians.

The judge’s opinion found that Meppen prisoners were held during the winter of 1945 in “atrocious” conditions and were exploited for outdoor forced labor, working “to the point of exhaustion and death.” The court further found, and Berger admitted, that he guarded prisoners to prevent them from escaping during their dawn-to-dusk workday, and on their way to the worksites and also on their way back to the SS-run sub-camp in the evening, according to he court.

At the end of March 1945, as allied British and Canadian forces advanced, the Nazis abandoned Meppen, said the judge’s ruling. The court found that Berger helped guard the prisoners during their forcible evacuation to the Neuengamme main camp — a nearly two-week trip under “inhumane conditions, which claimed the lives of some 70 prisoners.” The decision also cited Berger’s admission that he never requested a transfer from concentration camp guard service and that he continues to receive a pension from Germany based on his employment in Germany, “including his wartime service.”

Berger still collects a German pension check. tweet this
The Deutsche Presse-Agentur (dpa) said Berger was charged with assisting in the killing of prisoners between January and April 1945 as he guarded a march to evacuate the camps.

The dpa gave further details in the Berger story Thursday:

“During the period mentioned, the accused was transferred as a German marine soldier to SS Special Inspection VII, which assigned members of the Navy to the Neuengamme concentration camp and its satellite camps as security guards.

“The accused is on a list that was found in 1950 when the German cargo ship ‘Thielbek’ was sunk in the Baltic Sea with thousands of concentration camp inmates before the end of the war. The entry contains the addition ‘Meppen.’ The exact location of the accused during his transfer to the SS is not known.

“Due to overcrowding and a general tightening of the supply situation at the end of WWII, living conditions also deteriorated significantly in the Neuengamme sub-camps. In addition, from the March 23rd-24th, 1945 evacuation marches in the direction of the main camp in Neuengamme, which had been ordered by the SS because the front was approaching, resulting in the death of around 70 exhausted prisoners.

Berger was charged with assisting in the killing of prisoners between January and April 1945. tweet this
“Between December 26th, 1944 and March 25th, 1945, a total of 379 prisoners died in both camps and on the evacuation marches. Specific acts of intentional killing were only documented in isolated cases in the two camps, but not during the evacuation marches.

“The U.S. Department of Justice investigation has not linked the accused to any specific killing, in which the accused may have been an accessory.

“No further evidence is available. Surviving prisoners from the two camps are not known. The existing written material was fully evaluated.

“For this reason, the Public Prosecutor's Office in Celle discontinued the investigation in the absence of sufficient suspicion.”

According to The Oak Ridger newspaper, Berger “has lived for years in Oak Ridge [East Tennessee], but it is not known at this time whether he continues to live in the city.”

Berger was an active participant in one of the darkest chapters in human history. tweet this
Last month, the federal The Board of Immigration Appeals (BIA) dismissed Berger’s appeal from the Memphis removal order. He still faces deportation.