Q&A: A Sit Down with Co-Owner of Slim and Husky's

We had an opportunity to attend the soft opening of Slim and Husky’s, a new build-your-own-style pizzeria in downtown Memphis. The owners, Derrick Moore, Emanuel Reed, and Clint Gray started as high school buddies. Now they’ve become wildly successful business tycoons. What started out as a dream in a garage making their favorite pizza concoctions has snowballed into seven stores and counting. They are largely community focused and believe that supporting those they serve is paramount.

Memphis Flyer: So you say you had an executive chef, to help build your initial recipes?

Clint Gray: We brought in an executive chef, Chef Jason Williams, to, you know, kind of help us hone our craft and get the pieces together and the flavor profiles right. So we worked on that for like two years. In the process, North Nashville was going through gentrification, the early stages. And so we use our product to, basically, unite different neighbors that had issues with each other, at like community organization events or like clean-up events or just neighborhood meetings and things like that.

Did y'all have a storefront at the time?

No, we didn't. We made it out of the garage. It was just a commercial garage. I'm not gonna say we outfitted it, but we made it happen. It was basically empty.

No, no, we were giving it all away for free.


So how did you afford to give pizza away?

Yeah, so we had our own company running at the time. A transportation business, moving and storage, and expediting. So we were still doing that in the process of figuring out how to make a pizza.


So pizza was your big dream?

It was just... hospitality was like some that we really wanted to get into. Pizza historically is low-cost startup. However, we wanted to create a pizza product that was fitting for the neighborhood, but also gave you a lot of culture. And that's where pizza, art, and music came in. Oh, okay. Tell me about it.

So our theme is pizza art and music. So, you know, we want our spaces to feel like mini art galleries. So like even in this space, you know, we've got about five or six art pieces that haven’t gone up yet but that wall behind you will be full of art. And then we've got an art gallery that's going upstairs.


How long has Slim & Husky’s been in Nashville?


Sactown! What do you think has been the cause of the success of your store? I mean, it’s just pizza.

It's just been a combination of a few things, I think. You know, starting off, I would say pizza — our product is really good. Then, just, we're very authentic and how we do things not just on the pizza side but just our brand in general. We are a very active community-based business. So for example, I guess today we fed over 600 teachers here. You know, our social impact initiatives revolves around education. So, we always feed teachers first in our restaurants. We just do tons of community work. On the 21st of December in Nashville, we're feeding an entire housing project. We provide frozen pizza for them to have throughout the holidays. We're always looking to give back and engage the community, the same way we engage customers.


Whatever happened to the transportation company?

How do you keep up now with all of the demand of the restaurants?

We're very big on scaling and systems. Going into our business, we took a lot from the movie The Founder, and how McDonald's was built. So every process that we started out doing we would document, from day one. We still document that day — like changes that we make. We create SOPs and systems and checklists, like a lot of new restaurants starting off won't have ready until about three or four years. We did those things on day one.

Very Intentional. We believe in ownership, as well as keeping the dollars in our communities. So we purchased this building, and we developed it with Fifer and Associates, spending the development of dollars with other black-owned companies. Because we want to build our communities and build our culture and show people that we can do things on our own. That was very important to us. I think we're responsible for the inclusion process before anybody else. America has never really done a great job of including us. We’re not the type of businessman and not gonna sit back and wait. We want to make things happen for ourselves in our community.


How did you come across the builders for the space?

So, Fifer and Associates is an awesome company. First and foremost, but we've had a great a lot of different friends and family. Through friends from Tennessee State University. Somebody we reached out to initially, And I believe Moe met Carlos through Anderson contractors. We were all roommates in college at TSU. Moe and I both signed with my football at TSU. And so we became teammates, friends, and we just kind of stuck with each other since college and, you know, kind of worked on building our dreams together. 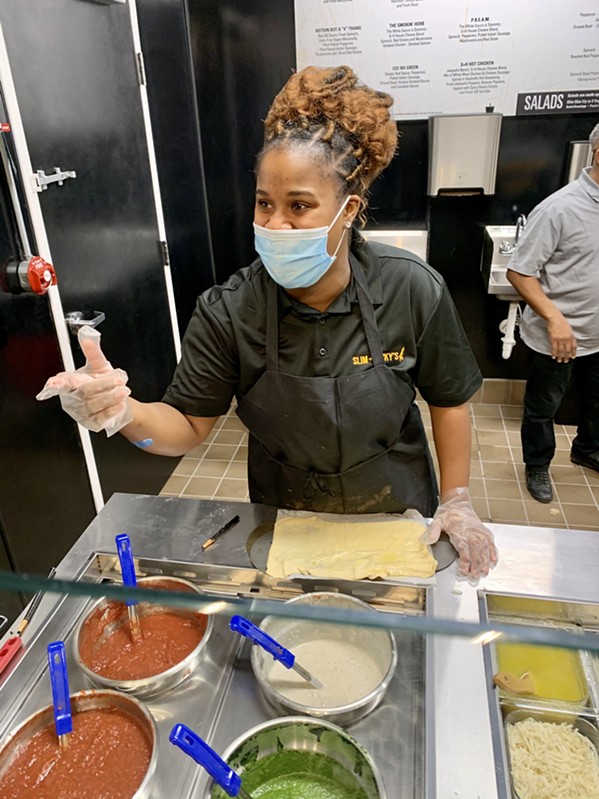 Moe and I both have passions for cooking. I'm a pro-amateur chef, not quite, all the way pro but we're not all the way amateur. And then EJ is like a taste tester.


You have six stores. Why is Memphis number seven?

Memphis was initially supposed to be the third store we have. We bought this building and it was a really big project from a renovation standpoint. It's a 95-year-old building. COVID really slowed it down, so it ended up taking about a year and a half, two years.


What's your next plan, taking over the whole world?

We've got two more openings. Pretty soon we got downtown Nashville, on Broadway. it's gonna be real big for us. And it sits right in the same complex of the new National Museum of African American Music. And then we've got another one in Murfreesboro, Tennessee. We've hired a super strong team here in Memphis. And we're really excited because we've been able to recruit people with restaurant experience; managers, assistant managers, as well as just our core talent in this store. We are really confident in, and prepared to provide Memphis with a top-notch product.