December 17, 2020
comment
COVID-19 Memphis
Infogram
New virus case numbers rose by 1,163 over the last 24 hours, the highest single-day increase on record. The new total puts the total of all positive cases in Shelby County since March at 58,762.

The Shelby County Health Department reported 8,762 tests were given in the last 24 hours, marking one of the highest daily testing figures on record. Total tests given here since March now total 757,582. This figure includes multiple tests given to some people.

Area hospitals continued to strain with high patient numbers. As of Thursday, there were 2,239 patients in acute care beds here, putting occupancy rates at 95 percent, according to the latest data from the health department. Of those patients, 378 were COVID-positive. Only 111 acute care beds were available Thursday morning. Intensive Care Unit (ICU) beds were 97 percent full with only 15 beds available. Of the 423 patients in ICU beds now, 164 were COVID-positive.

Four new deaths were recorded in the last 24 hours and the number now stands at 760. The average age of those who have died in Shelby County is 74, according to the health department. The age of the youngest COVID-19 death was 13. The oldest person to die from the virus was 101.

There are 8,376 contacts in quarantine. 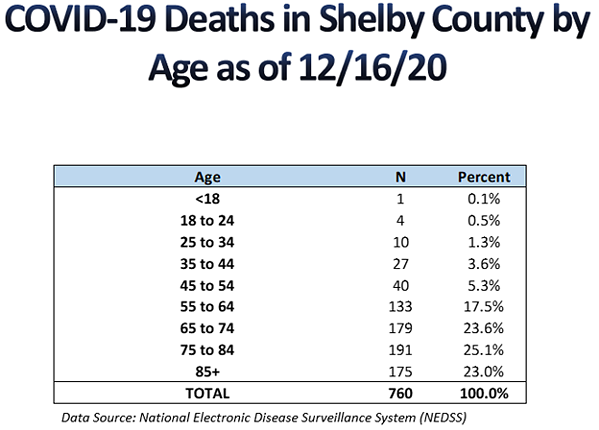