Earlier this week the Sycamore Institute, an independent and non-partisan public policy research center for Tennessee, released a report in which they broke down the fees and fines within the criminal justice system of Tennessee.

In their findings, they reported that there were nearly 360 public fees and fines authorized in Tennessee state law, a number that is higher if private acts are factored in. The number of fines is something that Josh Spickler from Just City found concerning.

“I mean, one of the biggest findings for me from that Sycamore Institute report was how many, which is something we've known for a long time has been an issue,” says Spickler. “As an attorney, or as anyone who's been through that system can tell you, just the sheer number of individual charges is really difficult to quantify. And so, of course, it also depends on what you're charged with.” 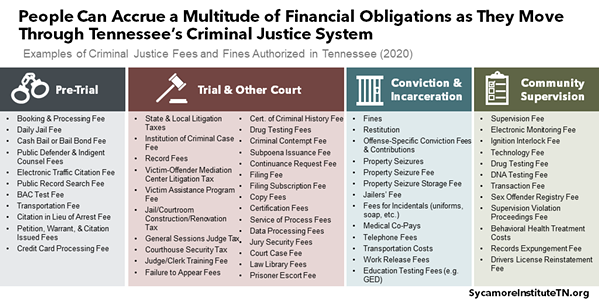 A daily fee for any jail time associated with a misdemeanor conviction, copays for medical care received while incarcerated, and fees and costs associated with court-ordered treatment for mental health or substance use disorders mean that those convicted can find themselves released with a hefty bill. Even when not charged with standard court charges, document filing fees and even courtroom security costs all end up compiling into sometimes ludicrous amounts.

The fees and fines in the criminal justice system are not levied out of spite. For the taxpayers, as well as state and local governments, fees are supposed to take some of the burdens off their community and to fund public safety initiatives. They are also supposed to be deterrents for crime. But as the Sycamore Institute points out in its report, more often than not, these fines end up causing more harm than good. For those without the ability to pay, fines and fees from previous convictions or court appearances can cause significant difficulty, the group says.

"Court fees are some of the biggest disqualifying factors of the thousands and thousands of people we talk to every year at Just City,” says Spickler. “The biggest disqualifying factor is that ‘Yes, you qualify. Yes, it has been 10 years since you were convicted. Yes, you have finished your sentence, you've gotten in no other trouble anywhere in the world. But you still owe $700 in core debt from that 12-year-old case, we can't get you expunges.’ So the fines and fees are a leverage point there. And then several years ago, [Tennessee] doubled down on it by saying if you owe that criminal court debt, specifically, in Tennessee, we're going to suspend your license.”

While the Sycamore Institute report does not recommend changes for the fees and fines system — the report is just one of a series that they intended to release in order to help policymakers better understand the human element in the criminal justice system — Spickler thinks income-based fines could be a solution.

“In Memphis, consider that the vast majority of people who come through that system are living in abject poverty. You can't get blood from a turnip. You can assess all the fines you want, it might as well be a million dollars, ten thousand dollars, one thousand dollars, it’s all the same. Make a 'finding of ability to pay.' And if you work three shifts at the warehouse and are cobbling together $12,000 a year, you know, a $50 fine, is significant to you. If you're assessing it to a director of a nonprofit with 20 years of legal experience like myself, that fine is going to be a whole lot higher. We're purportedly making findings of income and wealth before we appoint a public defender, so these are not new processes that we would have to implement into our system, but we need to make it automatic. Everybody who comes through that system, we need to assess their ability to pay their way through the criminal justice system and stop pretending that everyone on paper can pay, because most people can't.”